It’s important to me to keep this marathon training diary honest. I’m going through the same issues and trials, tribulations and achievements as other runners.

I have learned the hard way that you can’t have achievement without preparations. If you don’t warm up, stretch and progress with your training slowly you’re going to get injured. 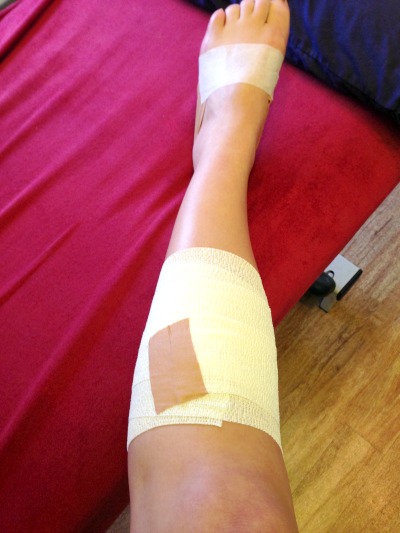 Above is a photo of my leg with a suspected meniscal tear in my knee cartilage and a strained calf. It could also be linked to an already weak achilles tendon, which is why my ankle is taped up, below. 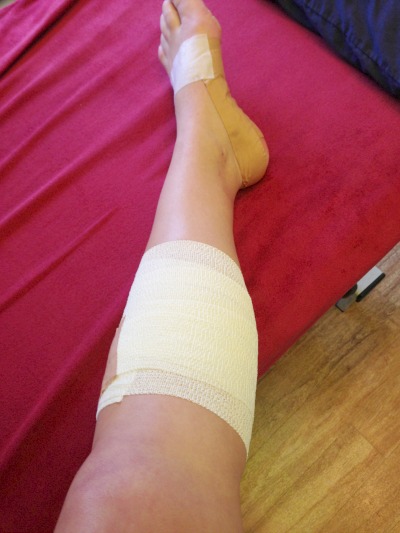 How did I do it? By not listening. In my head, I knew I should always warm up slowly before each run but being a busy girl I like to fit my run in before work, which involves waking up at the last possible moment, putting on my exercise gear and running at full pace straight away because it’s cold outside in the mornings. I also know that I shouldn’t go from three runs a week to six days a week straight away as there’s some rule that says you should only increase your mileage by 10% each week.And yet in January I started to train for six days a week out of nowhere. My December had been full of parties so I was averaging two or three plods a week. By mid January, I signed up for a 10k race on a sunday morning. I’d been working the day before and didn’t get home til 9pm so by the time I’d wound down and got into bed it was almost midnight. Like usual, I got up at the last possible moment and jumped in a cab to the race start line. After the starting gun went off, I was running less than an 8 min mile. At the third mile, my calf started to scream in pain so much that I had to stop and stretch it out. I limped round the course, stopping a few more times before I reached the end. 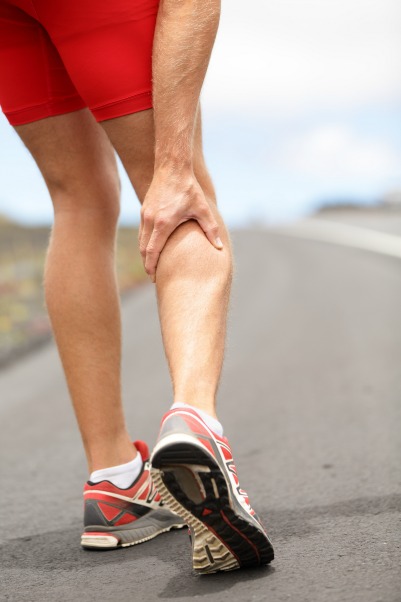 I knew I was injured straight away, but I didn’t realise how bad it was. I was due on holiday a week later so I thought I should just rest it for a week and the holiday week. But as it started feeling better, I may have tried the treadmill while I was on holiday. By the time I was back I was straight back to running.I saw on Facebook that some of my friends were up to 16 miles. So I jumped straight up to a 13 mile run during which I was cramped up for most of the way. The next week I attempted a 16 mile run but I had to walk after 10. Something was wrong!After some research into physiotherapists, Six Physio came up time and time again.

It wasn’t initially obvious what was wrong with me when I first visited them as I showed several symptoms, but without a doubt I have issues with my calf.I might also have a meniscal tear in the cartilage of my knee, which is where the cartilage inside the knee joint is worn down. This cushions the knee and if it’s worn down (after 4 marathons like I’ve done) then the calf absorbs some of the impact.I’ve had to cut back on some of my mileage and take it easy, as well as follow some other advice that is so useful it deserves it’s own blog post. But the lesson to be learned from this is to warm up and to increase your mileage slowly. Be kinder to your body or it will say no and you’ll get injured.Hopefully, Six Physio can make me better. Watch this space!