If you want to look like a VIP then you need to build your foundations. There’s no point in having a VIP outfit if you don’t have the poise and the posture to pull it off. A limp or a stoop or a slouch is so un-VIP.

However, I am the first to admit I am far from perfect. As a long distance runner who has completed three sub 4 hour marathons, I’ve damaged my body by pounding the pavements, clocking up the miles in training for the races. I’ve also spent years carrying a heavy handbag because us bloggers often travel with a laptop as well as a change of clothes from day to night. And on top of all this, I’ve spent so many years walking in heels that I have terrible posture when I attempt to walk in flats or flip flops.

Like most people, I’ve tried to bury my head in the sand about it and disguise it by what I wore. My thinking was wear something fabulous and people won’t notice the flaws but deep down I wasn’t happy. So when Six Physio told me about their new 2014 programme I was excited to go down to their Monument Clinic and find out whether I was fixable. 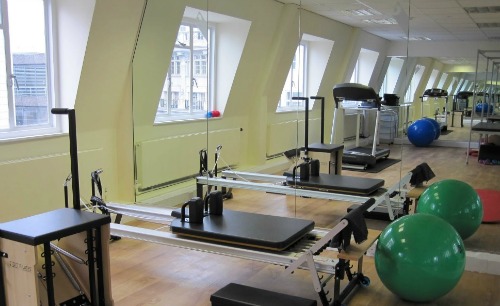 I had no idea what to expect as I thought ‘physiotherapy’ was a posh word for massage but Six Physio offer treatment for every kind of body problem. If you like cycling and want to be better, they will fit your bike to your frame and teach you how to move. Ski-ers can get posture analysis, pregnant women can get treatment for ante and post-natal issues and there’s a men’s health clinic that teaches men to find their pelvic floor (among other things). Anyone going in for physiotherapy for the first time will meet two physiotherapists – a manual assessment to assess and diagnose the problem and a rehab specialist to provide a movement diagnosis to fix the problem for good. The idea is to ease the pain with massage plus do pilates type exercises to correct the movement that led to injury in the first place.

‘DON’T TREAT THE PAIN, CURE IT’ is the motto of Six Physio. 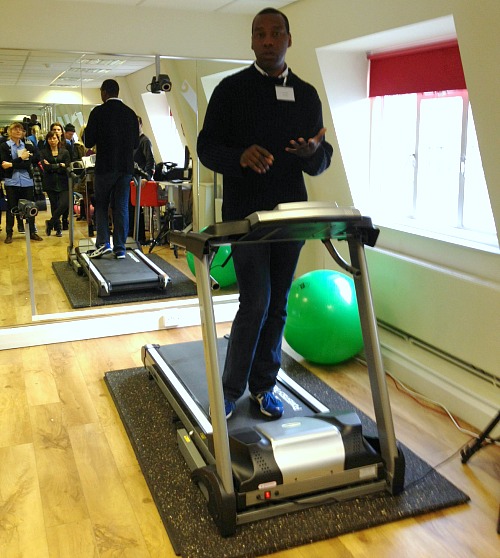 As I explained earlier, running is what causes me the most pain after years of pounding the pavements training for marathons so I went to talk to running coach Gary Telfer (above).  It was pretty evident this guy knows what he’s talking about as he was an international 400m hurdler whenever he wasn’t injured.

He gave a demo on a treadmill, asking the brave volunteer Faya from Running On Toast to walk on the treadmill and asking us to look at the flaws. If your shoulders are not aligned when you’re walking then try walking with one arm in the air. If your hips move too much then try putting both arms in the air. These simple tricks are designed to make you more aware of how your body moves so you can feel the difference between running with a good form and shuffling along hoping for the best. I was so intrigued I have booked in for a full running assessment in Feb and I’ll let you know how I get on.

Then over a smoothie (it’s green so it must be good for me) I met Six Physio owner Matt Todman and blurted out bluntly ‘I want to get 6 mins off my marathon time, what do you suggest?’ Matt actually had tons of advice – from the obvious hydration and pre-race food tips to things like the optimum time of day for running. What I found the most sensible is her said it’s all about making a few small tweaks to different areas of the run and by applying all of these changes at once you’ll cut down the time. Matt’s agreed to send me all these tips as there’s enough there for full article. How to Run Like a VIP…

And finally, I  couldn’t leave without trying some of the soft tissue massage. There are 10 Six Physio clinics in all areas of London, but in the Monument one I was surprised by the simplicity of the room. The comfortable bed is the only thing in the room. 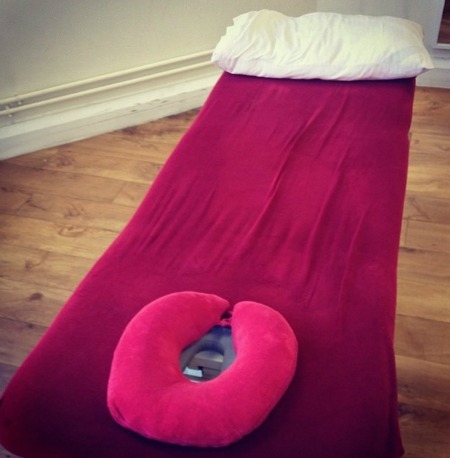 There was no messing – it’s all about diagnosis and fixing the problem and getting straight to it, which I liked. Who has time to waste talking when there is treatment to be getting on with? Six Physio’s Dan Scott treated me to 20 mins of attention on my hamstring, which is especially tight due to over-running. I  tried to explain what I was feeling to him but he ended up telling me to stop making excuses as he would feel it instead. Sure enough, he did and told me why I was feeling pain. He explained he wouldn’t go too deep to solve it (as a painful massage doesn’t always mean a good massage) but he would manipulate the area so I could walk with more movement afterwards. That 20 mins went way too quickly and sure enough, I did feel better when I left. If you have any form of injury, I think you need to check out Six Physio as it feels euphoric when the pain that’s been bugging you (for a few weeks in my case) reduces. Visit the Six Physio website for details and prices.

I will post the running tips from Matt Todman and details of my running assessment by Gary Telfer over the next month. If we’re going to exercise we may as well do it VIP style, right?