I love shopping, I love clubbing and I love hot weather (which is why I go to Ibiza every year) but I also want to do things I wouldn’t get a chance to do at home when I’m on holiday. I want to try new food and get inspired by beautiful architecture and that’s in limited supply in Ibiza now that I’m used to it.

If you’ve only got a few days off from work as you’re so busy earning money for your VIP lifestyle , then Istanbul ticks all the boxes and it’s just 3 hours 40 mins flying time from London. Bond films From Russia With Love, The World Is Not Enough and Skyfall were filmed there but I first became intrigued by it last year when Rihanna posted photos of herself at the city’s W hotel after a gig.

There were some other photos of Rihanna in the city at the time, including this one of her walking through a local bar. Having wrongly assumed Istanbul was full of historical and ancient things, this bar looks sleek and modern – just the sort of place I’d happily sip a glass of Champagne in.

Justin Bieber and David Guetta also performed in Istanbul in 2013, while The Wanted are heading there in March 2014 and Justin Timberlake will be there in May. There’s never been a better time to visit!

Fans of Istanbul love it for the individuality – it’s the only city in the world where Europe meets Asia and it also straddles the ancient and the modern worlds. The skyline is a glittering ribbon of palaces, mosques, and minarets, but also of sleek skyscrapers, where the restaurant and nightclub scene challenges New York’s or London’s with beautiful people dancing til the early hours. Just my kind of place!

If you’re planning a trip to Istanbul, this is what I recommend: 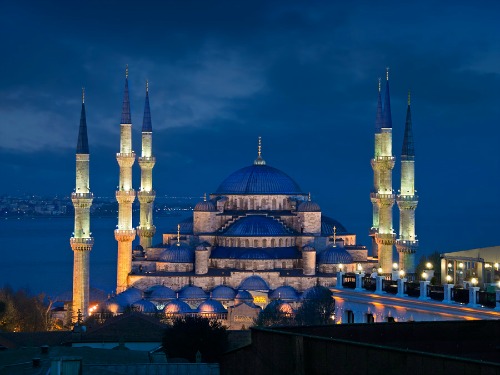 The Blue Mosque is one of Istanbul’s best sights . I also recommend visiting the Basilica Cistern – a 1,500-year-old building supported by 336 columns and the Hagia Sophia – It was a church, then a mosque and is now a museum; standing beneath its 55m-high dome is a humbling experience. Look out for superb mosaics of Christ, the Virgin Mary and Byzantine emperors  and the Viking graffiti scratched on the balustrade of the south gallery.

(2) Shopping and savouring the flavours of the Bazaar

The Grand Bazaar is one of the largest and oldest covered markets in the world, with 61 covered streets and over 3,000 shops which attract between 250,000 and 400,000 visitors daily. Go by tram to  Sultanahmet or Sirkeci for a real oriental shopping experience. 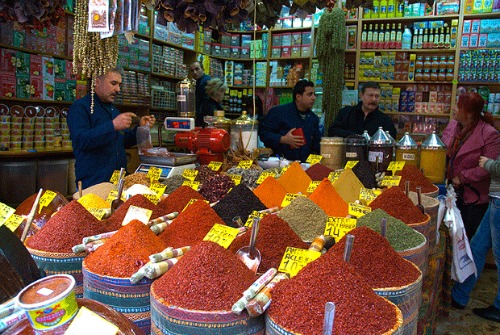 The Spice Bazaar (also known as the Egyptian Bazaar) near Galata Bridge in Eminönü is small compared with the Grand Bazaar, but is packed with excellent delis and shops selling Turkish delight, packs of apple tea, honeycombs, cheeses, dried nuts and fruit, stuffed figs, caviar, coffee, spices, and an incredible range of herbal teas for every complaint and condition. 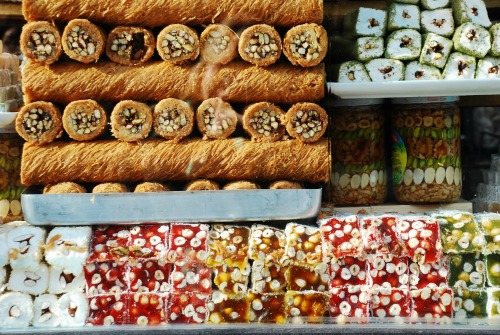 When you’ve had your fill of Oriental design, it’s time to head for the city’s modern malls which cover everything from high-end to high-street. Funky Istinye Park ( istinyepark.com) is a mini village populated by Bond Street-style stores under one roof – with golf carts available to help heavily laden customers back to their cars. It’s huge!

Kanyon  (kanyon.com.tr) has everything from Harvey Nichols to Wagamama – but you could be in London.

If you want to be a bit sophisticated, Sensus is a trendy wine and cheese ‘boutique’ a stone’s throw from the landmark Galata Tower, this cellar bar is lined with literally hundreds of bottles of Turkish wines. This is the place to come and try a wide variety of domestically produced wines, few of which you’ll find in the average restaurant, best accompanied by a platter of surprisingly varied Turkish cheeses.

Leb-i-Deriya is one of the first, and still the best, of the rash of rooftop bars which have swept across the city in recent years. Mellow music, cocktails and a hip, sophisticated clientele. And the views down over the Golden Horn and Bosphorus are just fabulous. For dinner, try 360 restaurant, which combines traditional Turkish cuisine with 360 chef’s modern flair. The views are to die for! 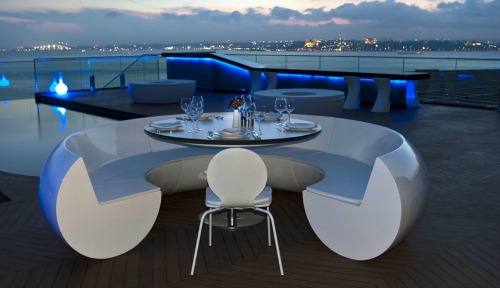 Now you’ve lined your stomach, dance it off at Indigo (famous for it’s electro scene) or if you want some style and glamour then Reina, on the banks of the Bosphorus – has two floors of house music and it’s where the Investment bankers and those with money go to party. Dress to impress!

(5) Sleep off your hangover at the beach 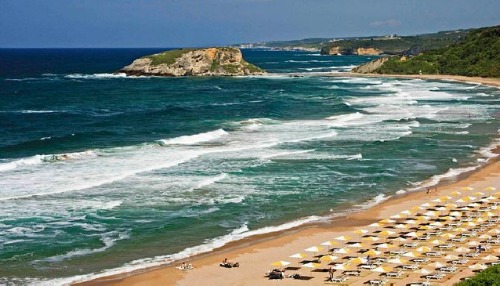 There are other beaches too, all within a 90min drive of Istanbul but you’ll need to hire a car to properly explore these.

(6) Stay in style…relax in your own private villa 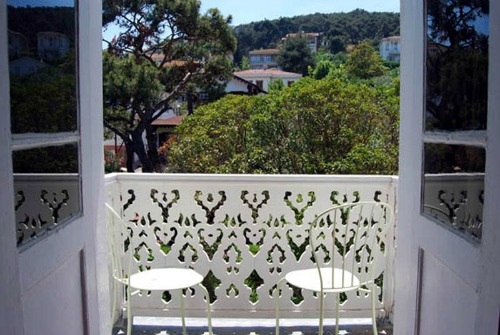 If you’re staying in Istanbul for a few days you may not have time to do this…but if you want to extend your stay then you’ll find that Istanbul can be as vibrant or as relaxing as you make it. If your schedule is as busy as Rihanna’s and you stay in a hotel in the centre of town then you’ll be constantly on the go. However, chose to stay in a villa on the outskirts of town and you can explore the sights for a day, spend the next day relaxing and go back out when you’ve had time to collect your thoughts and work on your suntan There are amazing real estate villas for sale in Istanbul via Turkey real estate guru Spot Blue.

Nearest Airport: Airlines including British Airways and Turkish Airlines use Istanbul Ataturk airport, which is 3 hours 40 minutes from London. Low-cost flight operators like Pegasus and Easyjet use Istanbul’s SAW airport.

Tips: Istanbul’s equivalent of an Oyster card, the Istanbulkart saves the hassle of buying tokens (jeton; £1) every time you travel. You save a shade over 30p per journey after loading the card – it can be used on the tram, metro, buses, ferries, funiculars and suburban trains.