Good morning VIPs! Who is excited that it is the weekend? I am actually still excited about last night as I got to interview Khloe Kardashian and what was really cool about her is that she was a lot nicer than what I expected…in a bad ass way. She swore, she thought carefully about the questions I asked her and she admitted to me that her biggest fashion mistake was wearing men’s Sean John tracksuits when she was a teenager. I mean, how many female stars would admit that?

I’ve got to transcribe the interview and it was quite a long one, so I will get it up at the weekend I promise. In the meantime, check out who attended her the launch party of the Kardashians new clothing collection for Lipsy at the Natural History Museum in London. Khloe wore one of her own dresses, obvs, and the earrings are in the collection too. How similar does she look to Kim in this photo though. Now Kim is blonde, you can really see the family resemblance:

Tamara Ecclestone showed no sign of a baby bump in her Lipsy dress.

Lizzie Cundy showed off her lovely legs in a black bodycon dress from the new Kardashians for Lipsy collection. She’s a good advert for it.

With all this sultry black in the room, I felt a tiny bit over-dressed in red. Oops! But then at least I stood out in the seductively lit room. 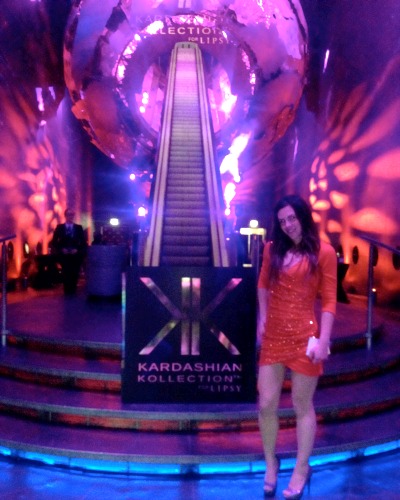 And also Stooshe brought their own brand of urban cool to the event. They know their own style and they stick to it.

And then I am not too sure what Made In Chelsea star Jamie Laing was doing at the party but at least he put on a jacket. Maybe he was hoping to find yet another girl to fall in love with in 5 seconds…

So please stay tuned for my interview with Khloe, which is coming up very soon. I’ll tweet when it is up so follow me @zoegriffin for all the latest!

In the meantime, you can check out the clothes on the Lipsy website now.