He’s only 25 but he’s lived in Paris and the Caribbean island of St Barth’s as well as Chelsea, his brother died on Mount Everest, he’s been chased by Colnel Gaddafi and he’s probably dated more women than men twice his age. Who is this? I bet you wouldn’t imagine it was Spencer Matthews, star of Made In Chelsea and Channel Five’s The Bachelor.

When I heard that Spencer had released an autobiography (which is out in the bookshops NOW), I must admit I was initially sceptical that someone aged 25 had done enough the book to fill a 249-page hardback book. But it turns out his relatively short lifetime has been rather dramatic! Although I started reading the book for research purposes, I found myself genuinely enjoying it and wanting to find out what happens next. This doesn’t always happen, trust me! 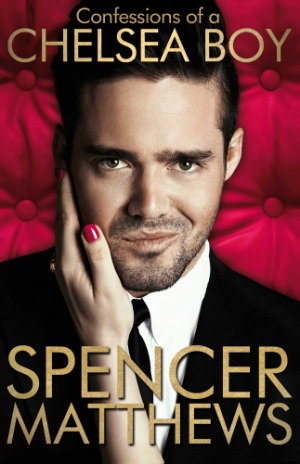 When I’d finished reading, I had a new appreciation of the reality TV star, and felt like I understood him a bit deeper. So when I was invited to interview him at Jewel Bar in London’s Piccadilly, I had a lot of questions for him, which I know other people will have after reading the book. Us VIPs always get to the heart of the action, right? I went in on three different areas – love life, drugs and the future.

QS: Are you currently single?

QS: What do you look for in a girl?

SPENCER: ‘I’m not looking for a girl. I’m 25. If the right girl came along and it stopped me wanting to play around, then that’s great but I’m not looking for that right now. I do think I will settle down and have kids eventually, but that’s a long way off.’

QS: Would you ever get back with an ex? I thought you and Caggie Dunlop were well suited.

SPENCER: ‘I don’t think Caggie’s boyfriend would think that! I am still friends with her and with Funda and with Louise Thompson and with all of the girls I’ve dated. They all tell me that I am a way better friend than I am a boyfriend. I’d definitely agree with that. I am a great friend, but I am a terrible boyfriend.’ 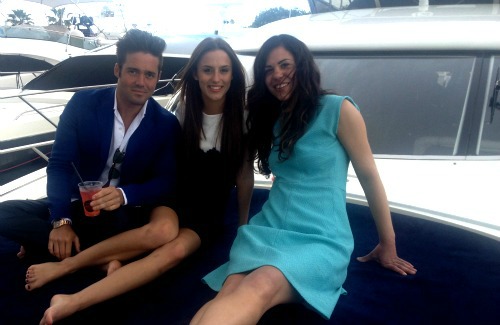 QS: What ALL of your exes? How are you getting on with Lucy Watson – who I met in Cannes with you (photo above)?

SPENCER: She is the only of my exes who I am not friends with but she is coming round. Slowly.

QS: You really know how the reality TV show ‘game’ works. Do you go out with people just to have a story for the TV shows?

SPENCER: Ouch, that is harsh. I think that all the characters who have been in the show since the beginning don’t have to do anything to compete for screen time.  People are interested in us and we have a following and because of that we have more opportunities and therefore we have more to give the camera. I genuinely like all the girls I go out with, it’s just for some reason it doesn’t work out, I can’t think what that reason may be. [GUILTY SMILE]

If I had more time with Spencer, I would have asked more about his exes as from reading the book it seems like he has A LOT. The Colonel Gadaffi incident is especially dramatic!
WHAT NEXT?

QS: Made in Chelsea has now won a BAFTA, do you think that was the highlight and it’s downhill from now?

SPENCER: Harsh! That was the first BAFTA. There is a lot more drama in the show next series, trust me. It’s tough to keep the standard high, but the next series we’ve gone above and beyond.’

QS: How long do you see yourself as being in the show?

SPENCER: I’ll stay for as long as they have me.

QS: Do you have any idea about what career you would do after Made In Chelsea? Acting? Presenting?

SPENCER: ‘I’ve made no secret that I want to be an actor but it’s a question of waiting for the right script. If the right part came to me I’d do it tomorrow, but there’s no point in doing something for the sake of it. Presenting, I’ll try that. I think it could be quite stimulating.

‘But for right now, I’m focused on Made in Chelsea and to make it the best in can be. And I want to enjoy the present.’

Did you know that Spencer had a serious career in the City Of London before becoming a reality TV star? I can’t imagine him going back to that somehow!

QS: One of the most shocking parts of the book is where you describe your experimentation with drugs. Why did you include that?

SPENCER: ‘I don’t want to glorify drugs at all. If anything  I want to help people who may be in a similar situation. The experience I had was so horrific – I ended up fighting with an imaginary person and couldn’t work out what was real or not.  It taught me a massive lesson. Maybe if others read that I did it and I hated it, they’ll be less likely to try it.’

SPENCER: ‘As I say in the book, I wasn’t entirely sure what I was taking. I was drunk and I was being foolish.’

QS: Were your parents pretty shocked reading that?

SPENCER: My parents are pretty understanding about my life. They helped me write the part of the book about my early years. And I think they could see that I’m unlikely to do anything like that again, which is a good thing.’

To be honest, I was pretty shocked. I’ve never tried acid oncelet alone twice in the same night (which Spencer allegedly did) and I will not be doing it now after reading Spencer’s experience! 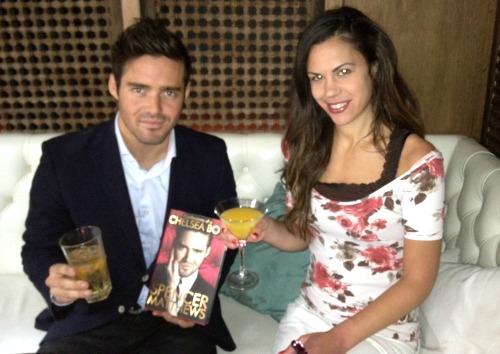 See, I told you I wasn’t going to ask him any gentle questions!  At least he still clinked his glass to ‘Cheers’ with me at the end. Cheers, to the future Spencer! Whatever it may hold….
Confessions of a Chelsea Boy by Spencer Matthews, is out now, published by Sidgwick & Jackson, hardback £16.99. Buy it on Amazon here.