The bigger the celebrity, the more careful they are about their diet. They realise that their bodies are one of their biggest assets and they also need to be in optimum shape to cope with the demands of touring. There are many ways to stay in shape of course but A LOT of celebrities are doing the same thing right now. Kimberley Walsh is one of them and she looks pretty incredible doesn’t she?

So what is it? Kimberley, along with Michelle Keegan, Donna Air, Julia Restoin Roitfield and all of the VIPs that shop in the Whole Foods market in Kensington (they all do) are fans of Savse smoothies. 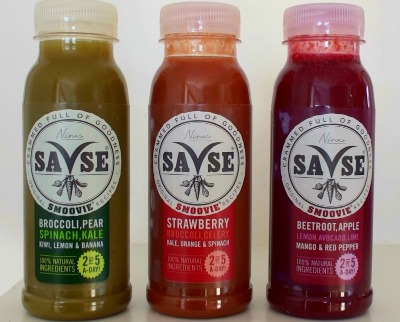 There are six drinks in the collection and each and every one has two of your five a day of fruit and vegetables. What’s more is that there are absolutely no preservatives in them, unlike many of the other so-called health foods currently on the market. All the ingredients they contain are on the side of the bottle and it’s all stuff that you’d find in the fruit and vegetable aisle of the supermarket – they are that healthy.

I actually asked Savse if I could try them because although I believe they are good for us, I was a bit sceptical about the taste. One of the flavours is broccoli, pear, spinach, kale, kiwi, lemon and banana – does that actually go together? In actual fact, that was my absolute favourite. Once I got past the green colour, I was impressed by how the sweetness of the pear flavoured the broccoli and spinach (so you couldn’t taste the veg) while the banana gave it a really delicious thick consistency. There is also broccoli in the strawberry smoothie and I enjoyed that so much that I had no idea until I finished it and read the bottle properly. Next on my list to try is the beetroot and apple one as it also contains red pepper and mango, which sounds like a spicy mix 🙂

M&S model and Transformers actress Rosie Huntington-Whiteley, who has one of the hottest bodies on the planet, is another celeb who regular endorses the benefits of smoothies, posting photos of herself enjoying them. And look at the effect it has on her skin, not just her body.

Savse has a lovely family origin as the founder Nina developed them when she was pregnant and had an iron deficiency. She has juiced ever since and because she couldn’t buy anything better than she made herself she decided to start selling her best products. I’m very glad she did as I will definitely be getting more of the Broccoli, pear, spinach and kale one. It makes eating your greens a lot more convenient…and tasty! Visit the Savse website to see where you can buy them and drink like a VIP!

Get The Look: Rosie Huntington Whiteley