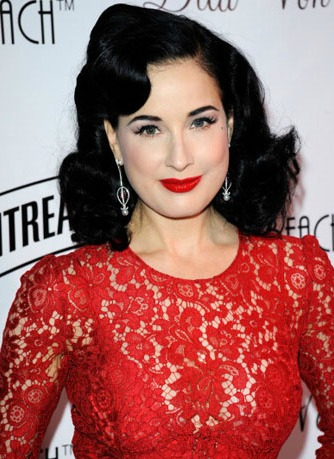 She’s got a body worth millions so it was quite intimidating to meet Dita Von Teese up close and personal in the flesh. This is a woman that knows how powerful her body is – after all she’s made stripping all about the tease  – while I got ready in about 20 minutes after spending the day running up and down La Croisette (promenade) meeting journalists, PRs and working out a schedule for the night’s parties.

Dita is one of a few stars that captivates everyone’s attention as soon as she walks into a room. I’ve met Hollywood legends, models and top footballers in the past and normally there are people in the background on their phones or texting or maybe even scratching or biting their nails. That’s not the case with Dita, as soon as she walks into a room all eyes are on her and everyone is paying attention. She just commands respect. To be perfectly honest, what she wears also captivates you as she appeared elegant and conservative in a long red dress with a bow to emphasise her small waist. And then when you get up close you realise it’s enticingly transparent and you can see her fabulous curves in more detail. I’m a woman and I was staring, the men were lost in another world. 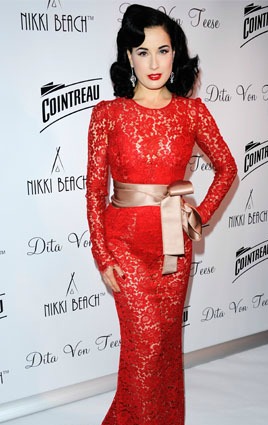 So with the scene set, what did Dita actually say? Here are the best bits…

QS: What are the favourite items on your dressing table?

DITA: ‘I like to set the scene with music. When I get ready, music is very important to me. And also, perfume. I do all of my own hair and make-up and I really enjoy getting ready. So perfume is great to get that whole aura. And then music.’

QS: Would you like to make your own music, an album or anything?

DITA: ‘I was thinking about making a compilation CD. I was just with my music guy. Because all of the music in the show, that’s my voice. So I do a lot of music for my show. Tonight what you’ll hear is a Mae West song and it’s my voice and I do the arrangement with my music guy. So I’ve about 17 songs and we can put them together – its just about how we do that to make them make sense. We’re working on it.’

QS: Are you going to do any more in the UK soon?

DITA: ‘I love making my shows. It’s like my own mini movies. When I do that I’m in control. So I do want to bring my own 90 minute show to the UK and put it in one of the theatres. But it would be expensive as I have to ship over my huge martini glass and my ball. So we have to wait and see. I’d love to.’

QS: You’ve been doing this for a long time, what are your secrets?

QS: What about having children?

I don’t know I don’t have a crystal ball.