Floating on my back at the edge of the infinity pool, letting the water take the strain of my tense, knotted shoulders and joints stiff from long days sat behind a computer, I looked out at a clear blue sea and felt completely relaxed. 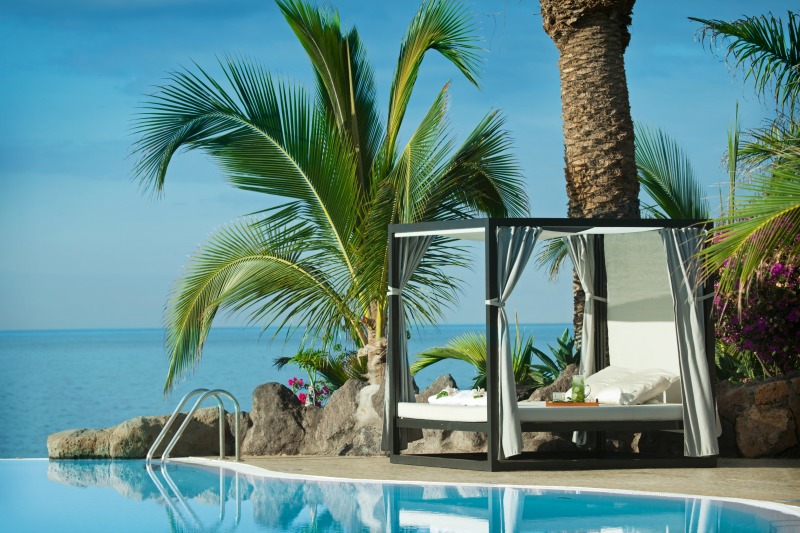 It was less than 24 hours since I’d arrived at the hotel but I already felt a million miles away from my fast-paced life in London. As the flight is just 4 hours from the UK and the transfer from the airport a breeze at less than 30 minutes, I did wonder why I hadn’t visited the Roca Nivaria Gran Hotel in Tenerife before.

Admittedly, Tenerife is perhaps not the first destination I would previously have associated with a luxury break. As a girl used to holidaying in the social hotspots and party cities of Dubai, Cannes, New York, Monaco and Mykonos, I had a bit of a snobbery when it came to the Canary Islands. Associated with package holidays and the dreaded ‘Brits abroad’, I was sceptical that I’d find the gourmet food, modern but classical décor, tasteful bars and luxury shopping that I knew I could get in the other cities. But after hearing the word Tenerife come up at social occasions, seeing it on the TV show The Only Way Is Essex and Take Me Out and reading about the Sky Team cycling camps in Tenerife, I figured there must be more to the island than meets the eye…and thankfully I soon found out I’d been correct. 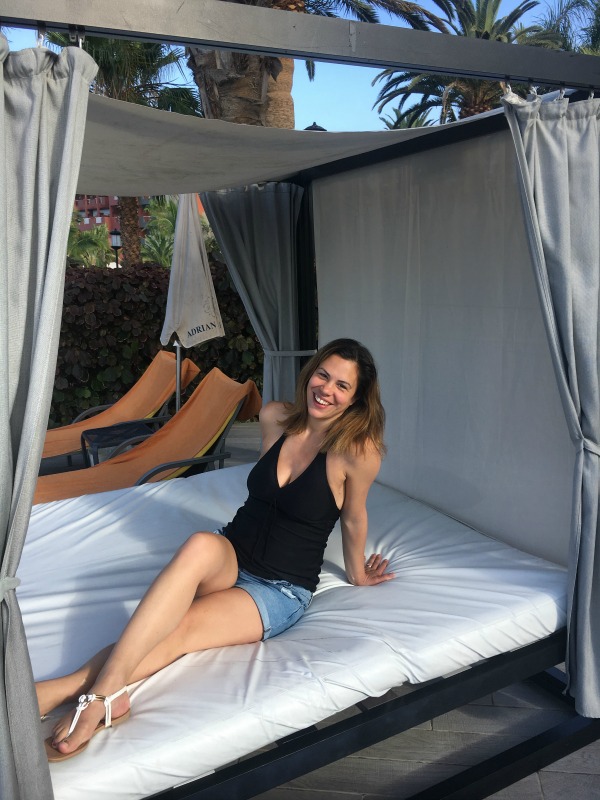 Not wanting to leave anything to chance, I stayed in the same hotel that TOWIE used to film in earlier this year. The stars’ Instagram accounts showed me enough of the Roca Nivaria Gran Hotel to make it look appealing and if you watch the Tenerife episodes you’ll notice shots of sunbathing, eating breakfast outside by the sea and balmy nights on hotel balconies – the vital ingredients of a decent holiday. 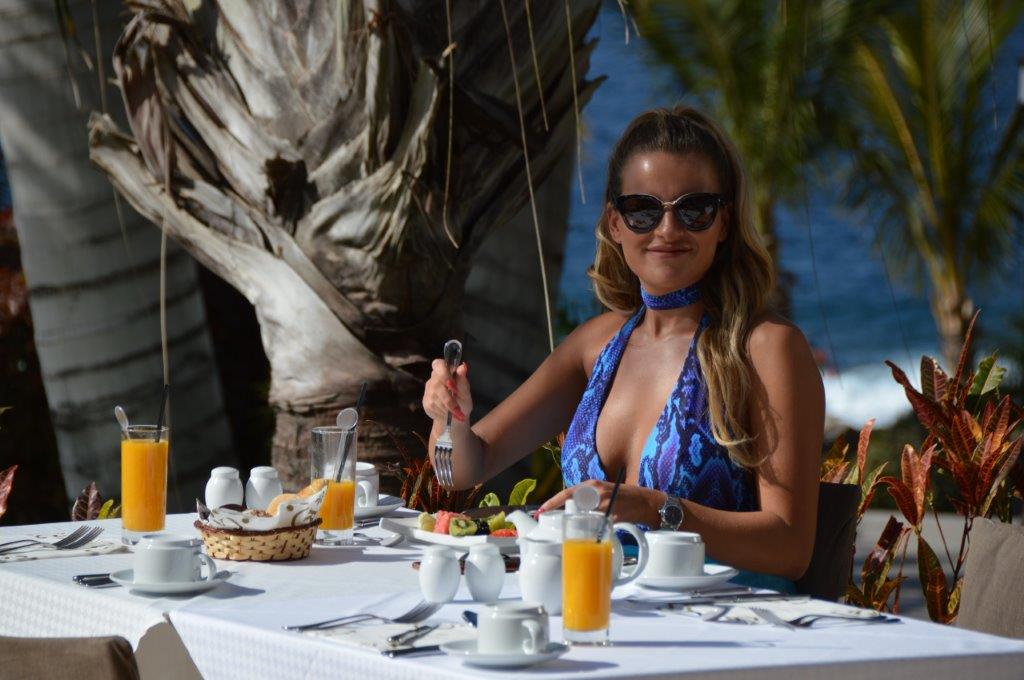 The hotel’s location on Playa Paraiso near Costa Adeje means it’s situated in one of the more upmarket parts of the island (which I liked a lot) but I soon found out that it’s a hotel that you just can’t tear yourself away from. With two infinity pools (one heated), a kids pool, a private beach with soft black sand, breath-taking views of the Atlantic from everywhere you step (including your room’s balcony) and a variety of top quality restaurants, you can walk around with the lovely feeling of confidence that whatever you need is never more than a quick telephone call away. There’s no need to worry about the weather either as it rarely rains in Tenerife and the mercury is guaranteed to be in the mid 20s or above. 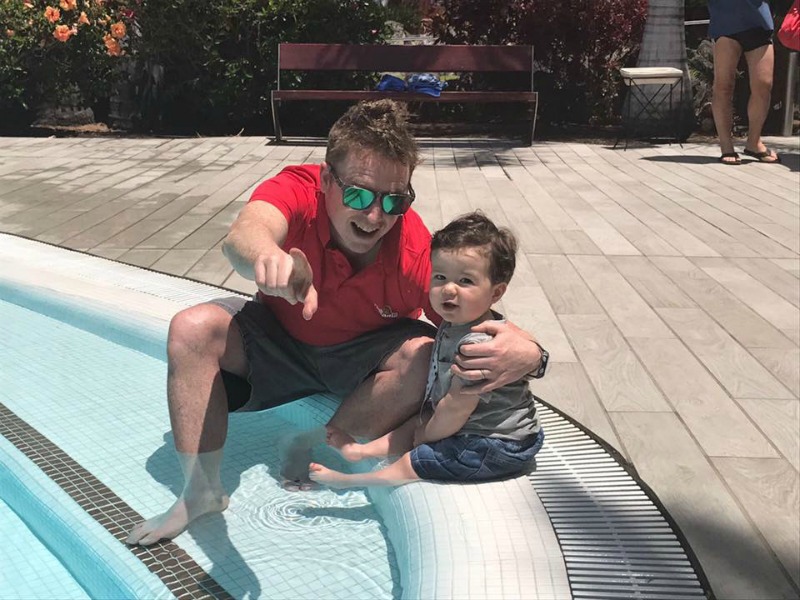 My travel partners were my husband and our 13 month old baby (pictured above), which isn’t the obvious group to enjoy a celebrity style holiday, but I’ve always thought that you don’t have to have a personality lobotomy when you have children. Besides, even 13 month olds deserve to holiday in style, don’t they? One thing you need to make this possible is to ensure the hotel has a great kids club, which the Roca Nivaria Gran certainly does (more about that later).

Every day started with a luxurious breakfast outside on the terrace, overlooking the Atlantic. We feasted on fresh fruit, yogurt and granola and my husband was a frequent visitor to the freshly cooked omelette station. I watched chefs cook pancakes fresh for me and then I smothered them with scrambled eggs and syrup. The croissants were also very more-ish, served warm and just the right size to tickle your tastebuds without leaving you uncomfortably full. 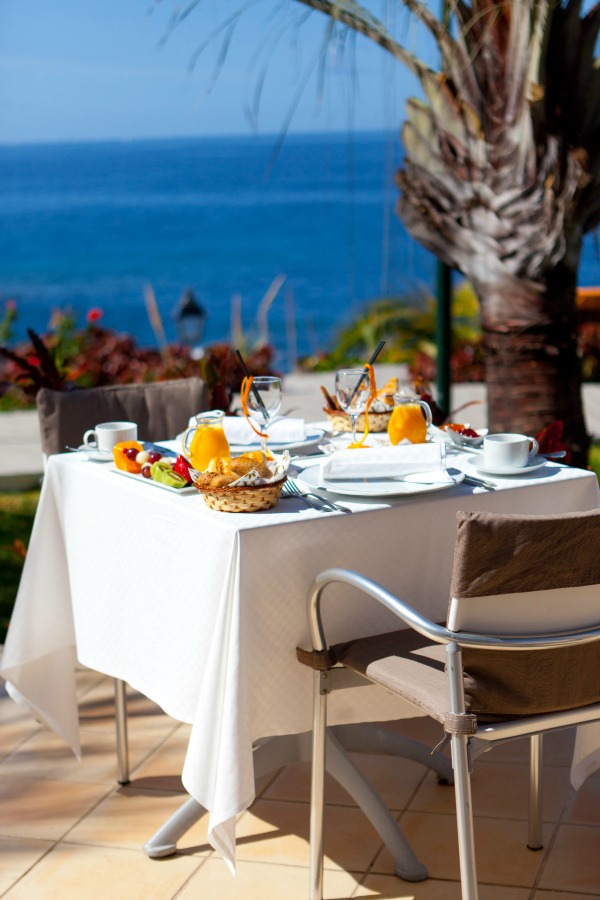 The baby and kids club, which is included in the price of your stay, opens at 10am every morning. All the staff we met went the extra mile to make the kids feel comfortable and between them spoke every language imaginable. Babies have their own padded fenced off area so they are safe from older kids and they have access to hundreds of toys, balls, stacking toys, pushing toys and soft play foam that captures their attention and makes them want to stay. There’s even a dedicated sleep room so babies can stick to their regular naptimes. When I picked Rory up for lunch at 1pm, I was told exactly what he’d done, what he’d eaten and drunk and if he’d had any wet / dirty nappies. 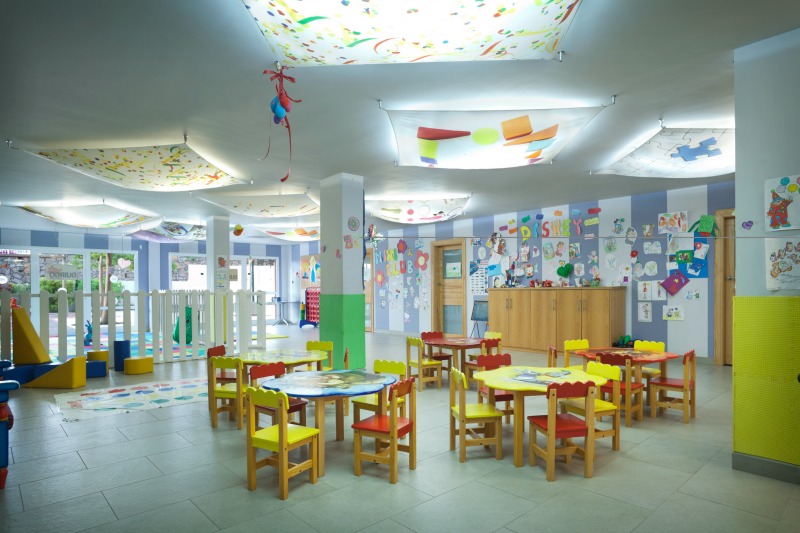 Lunches we liked to take by the pool, sampling a variety of BBQ food, paella and salads. My son loved the small birds which were so tame they sat on the back of seats, waiting until someone left the table so they could steal some morsels. After some ice cream and fruit, we liked to dip our feet into the pool, looking out to sea and catching up on the morning’s activities. My husband would usually have spent the morning cycling while I would have been topping up my tan, swimming and reading by the pool. My husband was in cycling heaven with Mount Teide being a mecca for cyclists. One on day, he was cycling down the mountain when he saw Chris Froome and Team Sky cycling up it as preparation for their Tour De France cycling. If you like to keep fit on holiday you can easily hire a bike on the island and our hotel had a fully equipped and air-conditioned gym for people who prefer a less sweaty workout (like me). 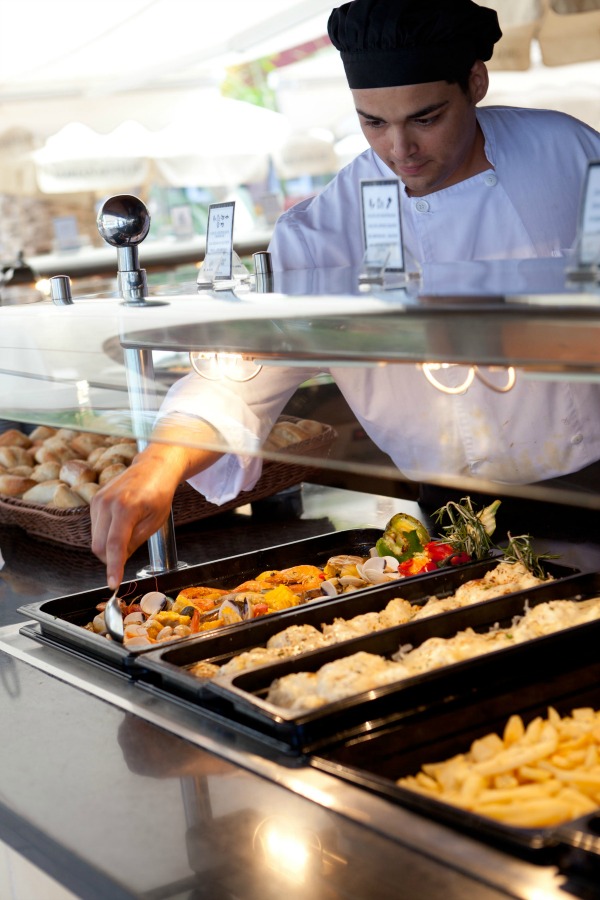 Our son was back in kids club from 3pm – 6pm, giving my husband and I some time together to chill. We rarely get to spend so much quality time together as a couple so it felt super special and was a chance for us to remember why we got together and stuck together. However, both of us looked forward to the end of the day when we collected Rory and took him to the pool. There’s just something about being in a swimming pool with an excited baby that makes you feel like a kid again yourself. 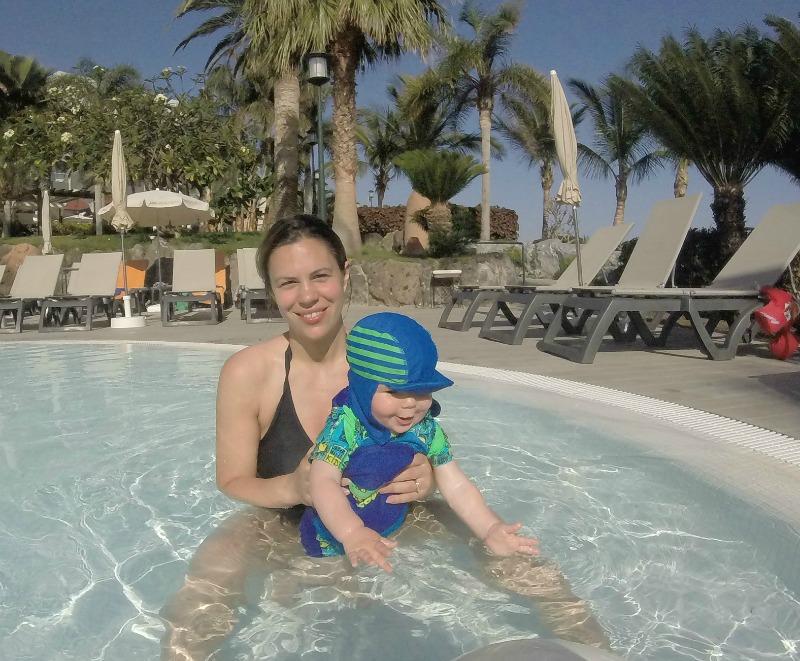 We usually ate dinner early to keep to Rory’s bedtime and this meant we always had a prime spot outside, whether eating in the buffet or in one of the hotel’s speciality restaurants. Instead of a traditional buffet, the Roca Nivaria Gran has demonstration stations. Every night, there are eight or so areas with chefs making a variety of meats, stews, stir-frys, grilled food, pasta and pizza fresh while you watch. It was warm and full of flavour, which was infinitely better than helping yourself to food that’s been sitting there for ages. I love a restaurant where you can see chefs working in the kitchen and this took it to another level.

Every night, we had at least eight hours sleep to the sounds of the waves crashing onto the rocks. I don’t usually allow the window to be open on holiday as I am severely allergic to insect bites, but I didn’t get any on the first night at dinner (which is always a test) and so I allowed the window to be open. To my surprise, I awoke in the morning to clear skin and a clear mind. My son used to get up around 5am at home but the sea air and timetable of activities at baby club helped him to sleep in until at least 7am in the mornings. Bliss! This meant we were all started the day in a better mood. 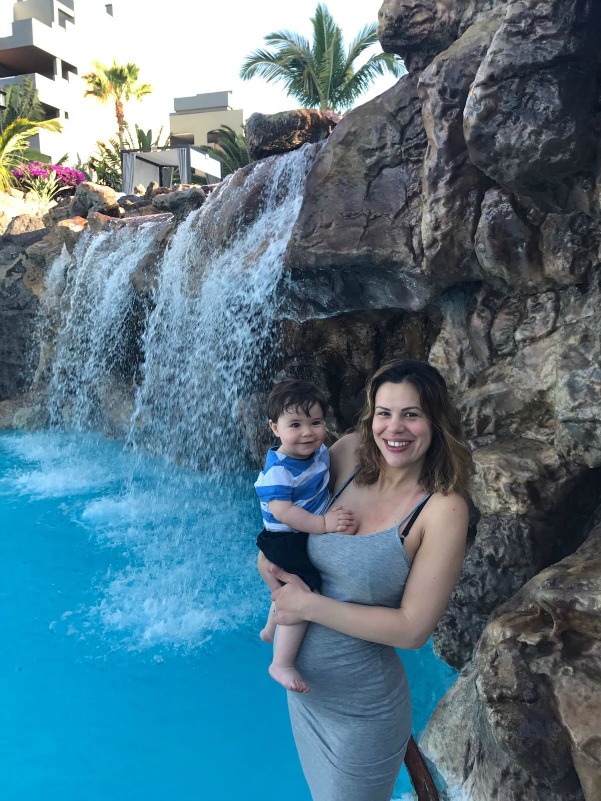 To holiday like a TV star, there needs to be fabulous food, a spectacular location, a relaxed setting and efficient service and we certainly had that at the Roca Nivaria Gran hotel in Tenerife. Now I have a new destination on my list of VIP holiday destinations. When people ask me where I enjoy holidaying my new list will be Cannes, Monaco, Mykonos, New York, Dubai and….Tenerife

Visit the Roca Nivaria Gran’s website to see more of what they offer.