How was your weekend? What did you do? Today, I’m able to answer those questions with something more interesting than usual as I completed the Olympic Distance at the AJ Bell London Triathlon. This may be the second time I’ve done the event (catch up on my first blog post here) but it’s the first time I’ve done it since becoming a mother just 17 weeks ago.

Or is it? Unbeknown to me, I was four weeks pregnant when I did the same triathlon in 2015 but at that time my baby was the size of a poppy seed inside a fit, rested and trained body. This time my body’s had nine months of being stretched and kicked, followed by major abdominal surgery with an emergency c-section and then a distinct lack of sleep due to a newborn’s demanding milk schedule.

Anyway,  I did it and I have a medal to show it: 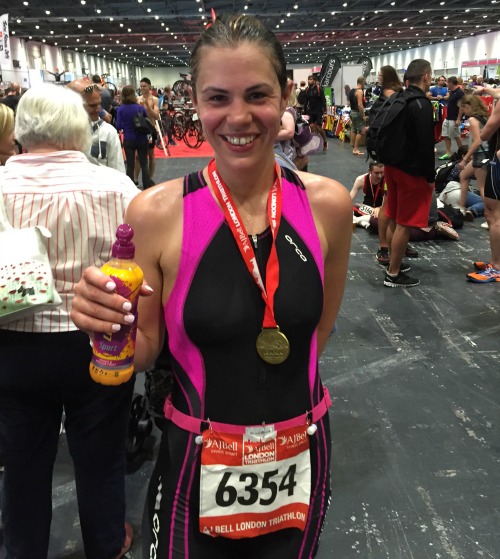 So how did I do it? First of all, I was highly motivated by some goals:
1) I enjoyed the triathlon last year and wanted to get a better time
2) I enjoy the training. I find that exercise cheers me up and makes me feel human and I don’t want to neglect myself just because I’ve had a baby
3) I was getting married 7 days before the triathlon and needed the training to help me shape up before my big day. I ended up losing almost 2 stone of baby weight in the 12 weeks that I trained.

Secondly, I treated each distance as a unique event with a little break in between. This is reflected in the amount of time I spent in transition because I liked to sit down and have a rest and an energy bar or gel before biking and before running. This made me feel rested and it broke up the 3 hours that I was doing instead exercise. If I did it again, I’d probably have less of a rest as that amount of time in between disciplines did affect my overall time and some of that rest time was unnecessary.

Finally, my third ‘general’ tip to anyone who is thinking of doing a triathlon and isn’t particularly fit is to just get on with it. On the day, I didn’t feel particularly healthy at all. Our start time was 710am, which meant we needed to be at ExCel London for 530am and this affected my sleep. I had a nightmare that I’d overslept and missed the start and found it difficult to rest after that. There was a lot of clock-watching that night and worrying!

The lack of sleep meant that I felt physically sick by the time I started the swim. There’s a race briefing while you wait to be led down to the water and I wanted to rip off my wetsuit and go back to the hotel for a little sleep before driving to get my son at his grandparents. I also felt a bit selfish leaving my son with his grandparents so I could do an event and I felt nervous because I wasn’t entirely sure how my body would react to this endurance event.

Before the swim, participants jump off a jetty into the cold waters of London Docklands and it was super cold. However, in hindsight I think that’s a good thing because it made me focused. My head cleared and I told myself that all I had to do was get up and down the water and then I could have a chocolate chip bar in transition (have you tried Clif bars – they’re sooo good!) 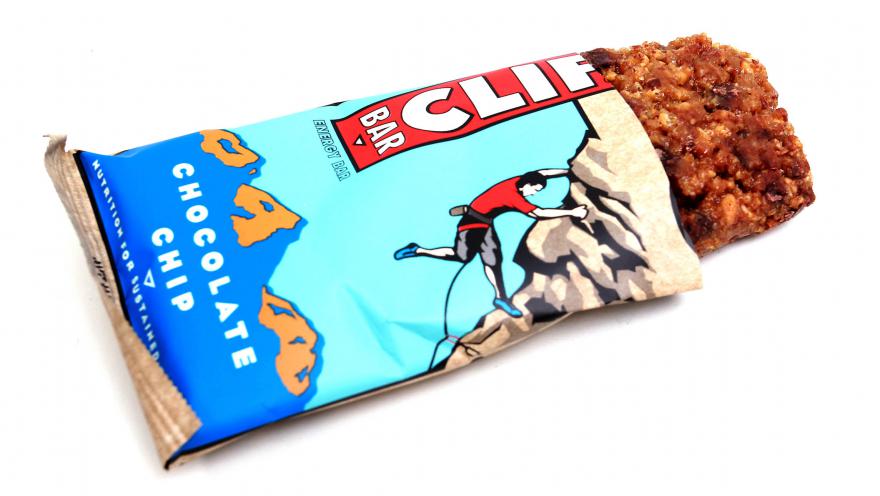 Last year, I visited Shepperton Lake to do open water swimming every week between May and August. This year, I only visited it twice because it was difficult to find someone to look after the baby at 7am when the lake opens and because it does take 30 mins in the car to get there plus 30 mins back plus an hour to swim and I’m not that much of a selfish mother to do it every week. However, I did make it to the indoor swimming pool each week to do 1500m or 2000m and I pushed myself hard during these sessions. I’d only done a bit of front crawl during pregnancy and so I was able to see my time improve with each session. I started off doing 13 mins plus for a set of 500m and got it down to under 12 mins per set – which would be more than 3 mins over 1500m. And it worked out as I ended up doing 1500m in just 32 mins on the day, which was 3 minutes faster than in 2015. I was so happy! Open-water swim practise is very important as you need to prepare psychologically for the dark, smelly water plus learn how to make the most of the buoyancy of your wetsuit. I would have gone to Shepperton Lake more often if I’d had the chance, but I’d have done the indoor sessions too. Last year, I only did open water training and although it’s a beautiful place to visit, it clearly wasn’t as effective as having an indoor and an outdoor session in training….

But then after transition and my energy bar, it was time for the bike and I let myself down on that. If you don’t cycle much, then it will show in your time. To be perfectly honest, I’ve never enjoyed cycling. If you read my 2015 blog post about the AJ Bell London triathlon, you’ll know that I only learned cycling because of the triathlon, which is quite embarrassing. I was 32 and learning to ride a bike after a period of 22 years when I gave up after a childhood crash.

Anyway, to cut a long story short, I went very slowly on the bike, mainly because I was frightened about crashing. My husband had fitted a speedometer on my bike, as he was worried about me going too slowly – I’m that bad! He told me to make sure I was above 12mph at all times and then I’d finish in 2 hours. The route is from the ExCel centre to Westminster and then another loop around the ExCel centre and if I didn’t finish it in that time, they were opening the roads to the traffic and stopping cyclists. This motivation made me complete the cycling in around 1 hr. 45. This is terrible when compared to my husbands time of 1 hr 07, but it means a lot to me. I didn’t get on my bike between August last year when I found out I was pregnant until May this year and I know that I could improve dramatically if I had more confidence from having trained more.

I had another little break in my second transition, so much so that a marshall waved at me and stuck his thumb up to see if I was ok. I was fine and just enjoying a rest sitting on the floor while I stretched my legs in front of me. Most people take the transition so seriously and run through it all, meticulously laying out everything so they can save seconds. I’d rather conserve energy for the real disciplines like cycling and running.

For running, my goal was to get round the 10km course. There was no point in setting myself a time goal because it would have stressed me out and I wanted to complete it and have fun rather than beat myself up about how fit I was (or wasn’t). Again, I didn’t run at all during pregnancy and when I started again I had to start slowly because of the abdominal surgery. I was slowly building up some speed over 5km in training but I’d only done 10km twice and both those times had an average speed of 10 minute-miles. To put this into context, I’d be running 8-minute miles comfortably pre-pregnancy. I went into the triathlon expecting this but I actually surprised myself and did 58mins for 10.5 km (6 miles) which is better than I did in training and it came after a hard 1.5km swim and a 40km bike.

When I crossed the finishing line, I was a sweaty and wet mess as I poured lots of water over my head during the run to stay cool. But I was ecstatic. I couldn’t wait to drive to my parents’ house in Herts to give my son a big kiss and tell him that Mummy had done it! I would have loved to have seen him at the finish line but because our wave was so early, it wouldn’t have been fair to change his morning routine just because his parents wanted them to be a cheerleader.

I’m thankful to my husband and my parents who supported me throughout my quest to get healthy post-baby and for trusting that I knew what I was doing when I told them I was competing in an Olympic distance triathlon so soon after giving birth. 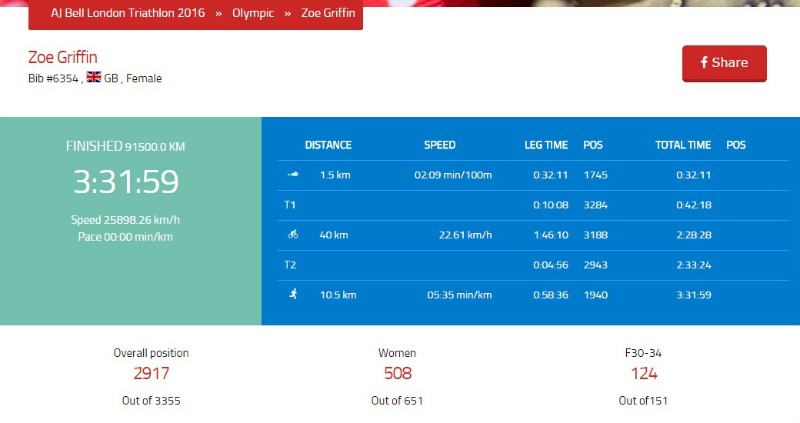 Other things I found helpful were:

Sigma Sports – I bought all my triathlon kit here and felt confident that I was prepared in terms of gear, even if I had no idea! Staff from this  specialist triathlon shop spent ages helping me find a brilliant Zone 3 wetsuit. Once I’d bought a specialized bike, they fit it perfectly and I went back to get it serviced before the race.

Shepperton Lake – I was terrified about swimming in the open water as you can’t see what’s beneath you. However, the lifeguards and staff at this lake are a calming presence and I felt safe there, knowing that they watch everything that’s going on. Also, the water is a lot cleaner than the Serpentine, where other triathletes practise.

Clif Bars and caffeine gels – I used Clif products when I was training for the Istanbul marathon in 2014. I’d tried other brands of sports nutrition and I found these easiest to digest so I knew that I could rely on them if I ever did more endurance events. For the triathlon,  I took a mocha gel containing 25ml of caffeine during the run and it gave me the buzz I needed to keep going when I was exhausted. I also had a chocolate chip bar before the bike leg as they contain slow release carbs to keep me going over the 40km bike ride. Also, I’m a massive chocoholic and knowing I had chocolate after the swim might have made me swim faster!

YouTube – I always feel more confident if I can visualise the course before I do it and you can find plenty of videos of it on YouTube. I also watched a few videos where the pros gave tips about swim technique, run technique and on how to finish safely. Before bedtime the night before, I imagined the course in my mind and visualised doing the swim, completing it, finding my bike, cycling to Westminster, running 10.5km through Docklands and then crossing the finishing line. I find that when I was actually doing the event, it felt more familiar because I’d done it so many times before in my head.

Asics trainers and Fitter Feet orthotics – I am prone to Achilles injuries but I managed to stay injury free during the triathlon. This is because I paid special attention to my feet this time round. I visited Fitter Feet in London, where they diagnosed low arches that caused all my leg injuries and while I’m not convinced how my strange feet caused every injury I had, I’ve felt better since getting orthotics. I use them in Asics Cumulus 17 trainers as they have a neutral gait and brilliant cushioning (because I don’t run lightly)

Will I do the event again next year? Never say never!