If you’re looking for a book that’s full of glitz, glam and gossip to brighten up those dark Winter nights then I have good news. There’s a new book about Beyonce and it’s written by J Randy Taraborrelli- the king of the biographers. 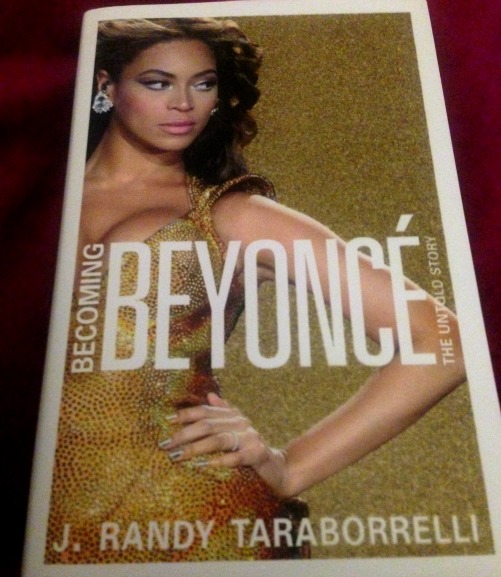 I know they say don’t judge a book by it’s cover but if you were going to do that then this is gold and glittery – just looking at it made me feel excited. And when I saw the contents page I was won over as this book covers everything from growing up with her parents Tina and Matthew, through to Destiny’s Child, meeting Jay-Z, the ‘affair’ Jay-Z had with Rihanna, the birth of Blue Ivy and the elevator incident with Solange and Jay-Z.

Every biography has at least one selling point – a juicy fact that makes people feel like they need to read this book for the scandal, even if they’re not fans of Beyonce (clearly some people are crazy). And J Randy Taraborrelli has history of picking out these facts as his 1989 biography about Diana Ross, Call Her Miss Ross, caused scandal around the globe and was what one reviewer termed ‘a marathon bitchfest’. He’s also the scribe of bestselling biographies about Michael Jackson and The Kennedys.

So what did he uncover about Beyonce through conducting hundreds of hours of interviews with several sources? At the start, we learn that a teenage Usher turned up to Beyonce’s house to hang out and was mooned at by Beyonce’s mum Tina. Random but funny!

At the end we learn about the elevator incident and the account that Taraborrelli gives is that Beyonce was opposed to Jay-Z attending Rihanna’s Met Ball after-party, based on rumours that Rihanna and Jay-Z had an affair, which are according to Traraborrelli just rumours. Solange stepped in to defend Beyonce and Beyonce was mortified. They’ve all kissed and made up since.

And in the middle, if you want to know what makes a diva tick and what it takes to climb to the top in music then this can be your guide. There is a lot of detail about all the bands she’s been in and her ruthless work ethic, which is inspiring as it shows you have to go the extra mile for success. Beyonce has planned every step of her rise to fame – nothing was handed to her.

When I started this book, I hoped to unearth some scandal but it seems that Beyonce’s real-life is as flawless as the image she portrays. I wasn’t disappointed though because on closer reflection, I found  her perfection impressive and the reason her life is free from scandal is that she coldly cuts drama from her life. Anyone wanting to succeed in life would do well to adopt some of Beyonce’s principles. If in doubt, think What Would Beyonce Do?

I think Beyonce would definitely learn as much as she could about the industry she wanted to succeed in and study other successful people. So if you like Beyonce or you want to succeed in the music industry, or any business, then this book will help.

Becoming Beyonce by J Randy Taraborelli is available now on Amazon for £9.Great value for a glitzy hardbarck.