I love London, but sometimes I just wish I could take a break from the miserable weather and stressed out commuters. Wouldn’t it be amazing if there was a place where the drinks were strong and fruity, the food was spicy, people were full of laughter, excitement and optimism and maybe there was a bit of live music or a DJ? Welcome to the world of Trader Vic’s, which feels like it’s in a different world even though it’s situated in the middle of Mayfair inside the Hilton on Park Lane.

My sister and I hadn’t had the best of days when we descended the wooden staircase down into what can only be described as ‘Polynesian Paradise.’ It was cold and wet outside and one of those days where every single mode of transport is against you – tube delays, road accidents affecting buses and people with umbrellas knocking you out as you try to walk down the sodden streets. But as we walked down those stairs, we couldn’t fail to be wowed as we were confronted by a world of dark wooden tables, bamboo, sea-inspired ornaments decorating the ceilings and the walls and people sat at the bar who had giant cocktails in front of them, most of them garnished with a cocktail cherry or pineapple or both.

Trader Vic’s has been in London, and more importantly been a popular party destination, for more than 50 years and when I first tasted one of the drinks I could see why it’s loyal customers kept returning and new ones start to get addicted. My sister and I didn’t need to talk to each other about the hardships of the day, we didn’t need to fake a smile. I personally felt the stresses of the day disappear with each sip. 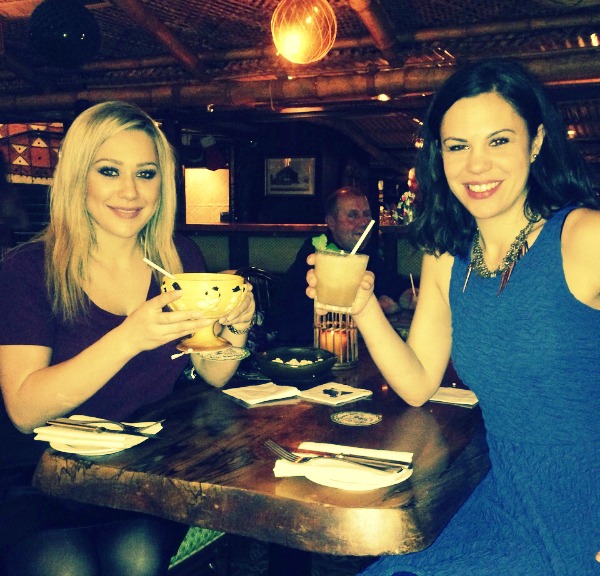 The couple who took this photo were on their way out of the restaurant and as the lady left, she said: ‘Enjoy your night, girls. I’ve been coming here for 40 years and I still love it. I was a vintage playboy bunny and the things we got up to…’ Well, she didn’t get to tell me what she did as her partner dragged her away but I could imagine fun times fuelled by these cocktails. They’re devilishly more-ish so my sister and I decided we should try a few more and see if we could find out what king of ‘things’ she was talking about. Journalistic research and all that…

Trader Vic’s is currently celebrating 50 years of their world famous Mai Tai cocktail  – a strong concoction of rum, curaçao liqueur and lime juice – so obviously I had to try that. However, there are 11 different variations of the Mai Tai on the cocktail menu so I started with one mixed with Guava juice because I can’t remember the last time I’d had a guava cocktail. My sister had the giant sized Raffles bar gin sling, which she’d had in the Trader Vic’s in Bahrain (there are 17 Trader Vic’s around the world). Both reminded us of something you’d get served on a beach somewhere tropical. They were both too easy to drink so we had another while we looked at the bar snacks menu. 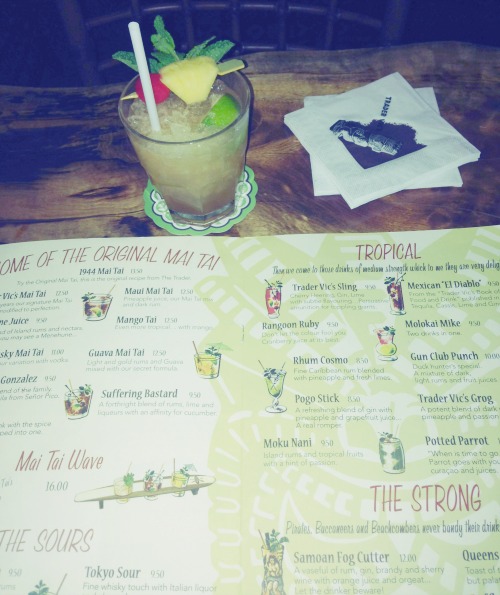 The 1944 Mai Tai is the original classic Mai Tai and as I have never had a Mai Tai before I thought I should have one to put the guava one into context. As you can see from the photo above, it looks quite retro with the pineapple and glace cherry. However, do not underestimate it – this is one strong drink! The name Mai Tai came from Victor Bergeron (the Vic in Trader Vic’s) who made the drink for his friends from Tahiti. One took a sip and declared ‘Mai Tai – Roe Ae’ which means ‘Out of the World – The Best’. The name stuck and I think it’s perfect. The cocktail was indeed Out Of This World, although I do think I preferred the guava one, below… 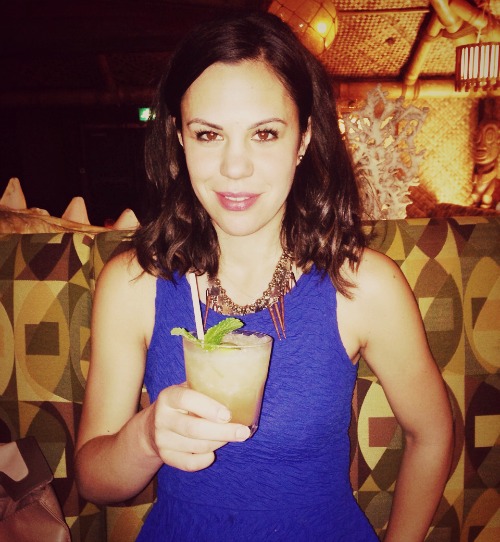 My sister’s favourite cocktail was the Trader Vic’s sling, below, (Cherry Heering, Gin, Lime), which was served in a huge glass. At £9.50 it was pretty good value for money for it’s taste and size, given that in The Dorchester next door you’re looking at £16 per cocktail minimum and The Dorchester is a lot less fun. 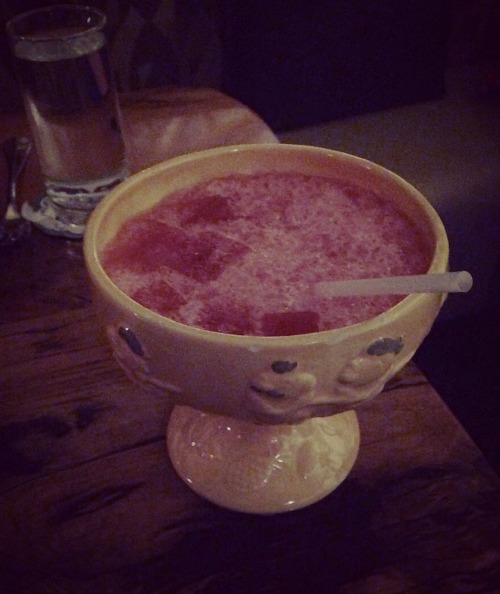 By 8pm the venue was starting to get busy and we couldn’t help notice how diverse the clientele was. Next to us was a couple quite obviously on a date (he was more into her than she was on him) and it got me thinking that it’s an ideal date venue as even the most awkward of conversations could become bearable after a few of these cocktails. There were a couple of work groups on their Christmas parties and there was an older couple with what we thought were their grown up children. There aren’t that many places in London that span the generations – if your parents like a place then you probably won’t and vice versa – but the Tiki theme clearly has a universal appeal. The live band starts at 930 with the DJs getting in at 11 and there’s a late license til 3am. If your parents are still out that late, we salute them!

After two pretty strong cocktails the room was starting to spin like I was at sea so I jumped on the food as soon it came out. The spring rolls had a delicately puffy casing packed with vegetables but the piece de resistance was the tamarind sauce. Delicious! 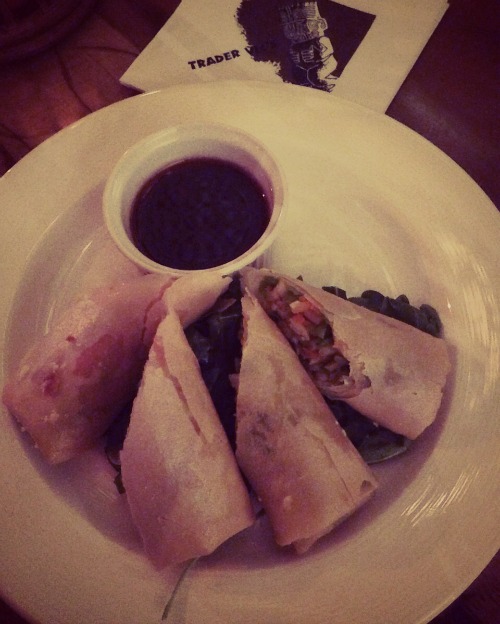 I highly recommend the tidbits platter which contained a mix of crab Rangoon, BBQ spare ribs, char siu pork,  and crispy prawns. However, it did make me wish I ordered more of the ribs, which week covered in an addictive sticky glaze and flaked perfectly off the bone.

Wok fried beef tenderloin was served with shrimp and black pepper and steamed rice, which is a great option if you’re want to enjoy what you’re eating without any guilt. My sister ordered this and ended up stabbing me in anger as I kept nicking too many beef pieces – it was so tender! 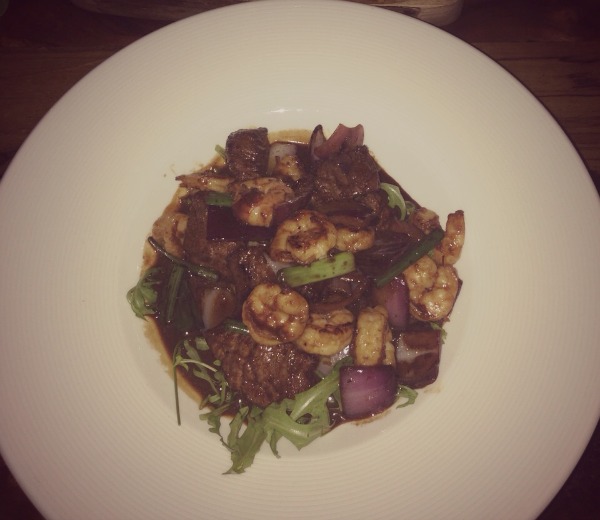 In fairness I did offer her some of my burger, which came our beautifully presented on a chopping board. I could tell the chef was experienced at making these as it was my idea of medium – not red and not burned – with a brioche bum lightly brushed with mayo. It’s the small details like the brioche that take a burger from perfectly acceptable to pretty damn amazing. 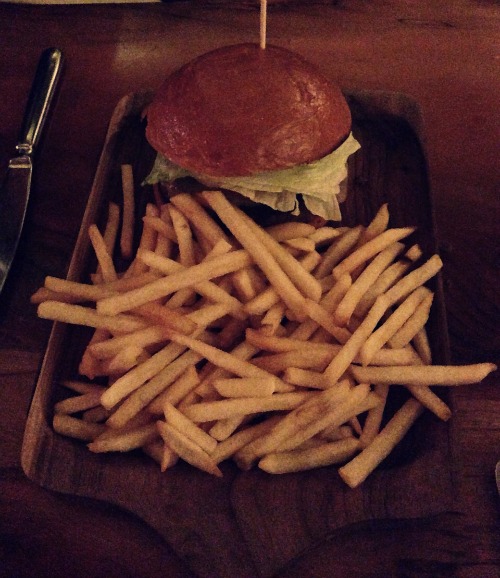 There was time for one last cocktail before getting our coats and braving the journey home so we ended in style. My sister’s was the Zombie (light and dark rums, grenadine, curaco) whereas mine on the right was a White Cloud (coconut and creme de cacao laced with vodka). It tasted like a liquid version of a Raffaello truffle. Heaven! 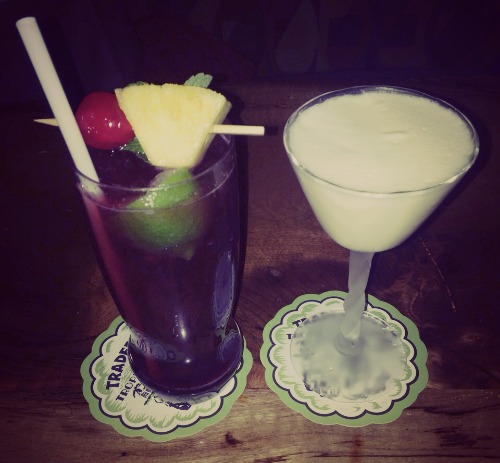 At least we did plan to end it there…but it never happened. When the waitress asked us if we enjoyed our drinks and we enthusiastically told her we did, she pointed out we were yet to try her favourite cocktail. That was a MokuNami (island rums and tropical juices with a hint of passion). Won over, we decided to have our final ‘for the road’ and it ended up being a great decision. Less aggressive than some of the other cocktails on the palate, it was refreshing with a slight kick of rum. I really loved the barrels it was served in too as they kept the drink cold without making your hands freezing. 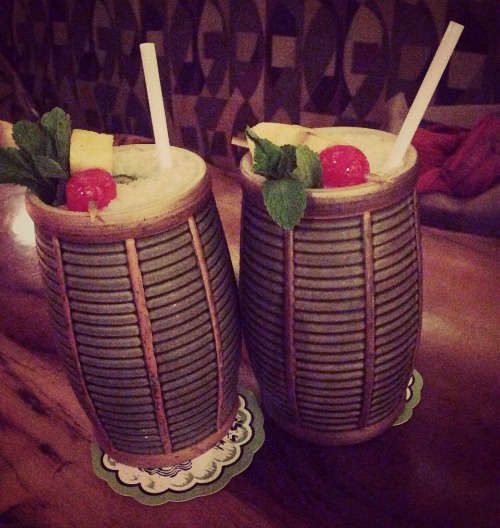 Did we get up to ‘things’? like the vintage playboy bunny did? If you listened to us at the table as we were eating and drinking you might have imagined so as there were sounds of delight and joy coming from our lips. Think Mmmmmms and oooohs and aaaaaaahs 🙂 Perhaps we’ll just have to go back for more of the rum laced delights and see if more ‘things’ happen, which we are perfectly happy to do.

Deals to Solve the January Blues!