When was the last time you walked into a restaurant in London and got greeted with a smile? I’m not talking a fake smile and I’m not talking a smug smile that you get from some of the ‘see and be seen’ venues where the door girls are supermodels and smile in smugness (or relief) that they’re better looking than you. That’s not to say the staff are unattractive – far from it – but it seems their main concern is making you feel good.

From the moment I walked into Salmontini and handed in my coat and scarf, to the moment of ordering food and drinks and then ordering more (those cocktails are irresistible), I  felt welcomed and looked after. And it wasn’t just me. As I sat in the middle of the restaurant I could see people walking in from the cold Winter streets and visibly warming up and relaxing the moment they were through the doors.

Salmontini is located in the heart of Belgravia, one of the smartest neighbourhoods in London, but while the restaurant is stylish and decorated luxuriously, it’s been designed with comfort in mind. The tables are perfect for groups to hang out and relax with super soft sofas and plush armchairs to lounge on. The bathrooms are beautiful – with lots of mirrors and hand lotion and soft hand towels, a place where you could happily longer to gossip with the girls. Food is designed to be shared and the cocktails too because no matter what you order, you’ll get envy for your friend’s one – trust me!If you don’t want to take my word for it look at the photos: 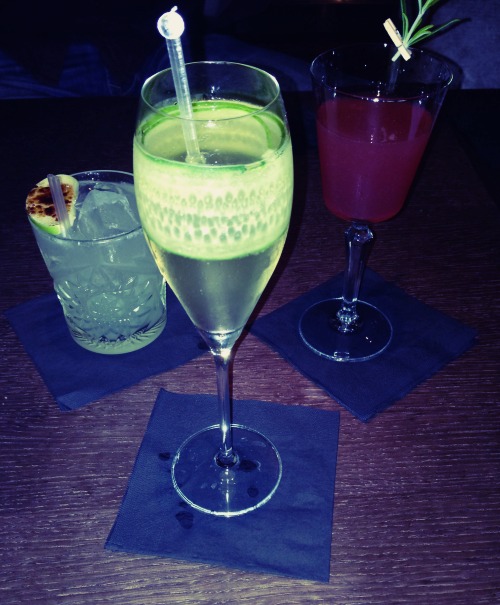 From left to right, that is a Cu Cu, a.Belgravia Garden and an Aladdin’s Wish. The Belgravia Garden with Champagne, Hendricks Gin, Cucumber and Elderflower was my absolute favourite as it was light and refreshing, evoking some memories of summer and taking my mind off how cold it was outside. However, the Aladdin’s Wish was also divine with a strong essence of Chambord and a twist of elderflower, it felt delicate and so so moreish! 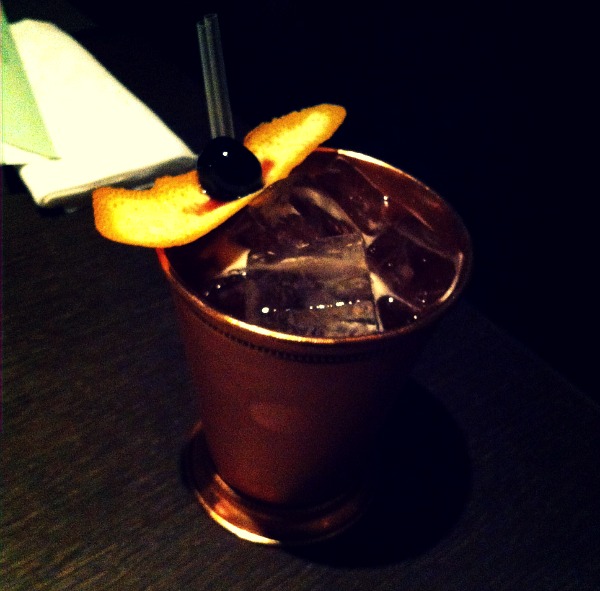 This is  a Magic Monkey, which I would say is an ideal after dinner drink. With a base of run, it’s both warming and full of flavour and one to savour while you relax on the sofas and gossip into the evening. 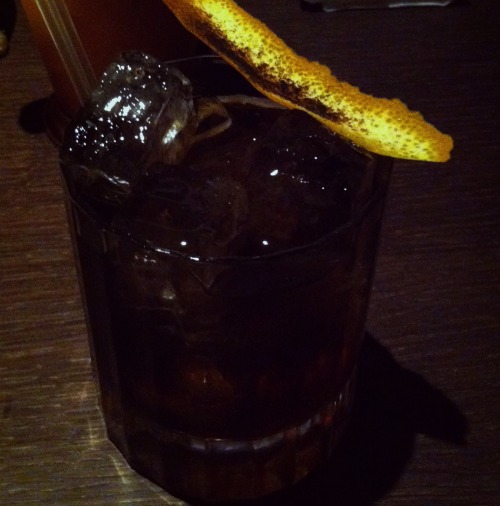 Alternatiely, if you feel like you’re in the mood for Christmas, this was one of their yuletide specials – Santa’s Spicy Secret – made with rum, chilli sugar syrup and some other special (and secret ingredients). This is like theatre in a glass as the barman lights the orange zest at the table.

As for the food, it looks amazing and it tastes even better. It’s light and healthy so it won’t make you feel uncomfortably full for your night out and there’s joy in each mouthful.  just like the cocktails. That’s not to say it’s overwhelming, as the emphasis is on quality ingredients with a couple of complementary flavours rather than too much for the brain to take in. For example, the sashimi was delightfully fresh and tender so it came as it was – tuna, salmon and crab. The maki rolls had soft tender fish and rice that dissolved in your mouth, served at an ideal temperature. I can’t stand dry rice so I was pleased about that and I happily noticed there wasn’t too much mayo, which less luxury sushi restaurants use to disguise the quality of their fish. Instead, the ingredients complemented each other to the point I started to question what would happen if I took another portion before my friends realised I’d had more of my share. 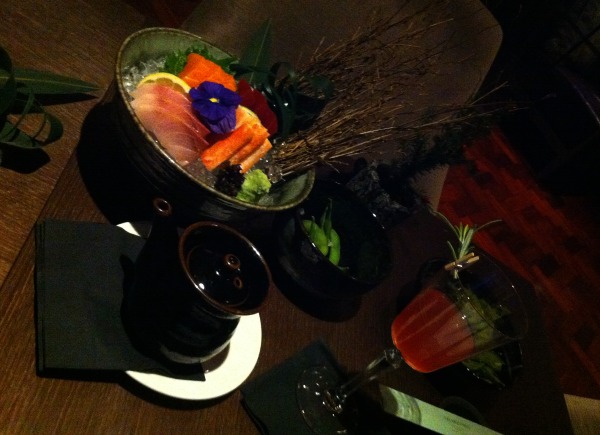 The sashimi above almost looked too beautiful to eat but I think it tasted even better than it looked so I was glad I made the decision to try some, Below you can see the Volcano maki rolls with apple, mango, spicy mixed fish and wasabiko and tobiko. I’ve never tried anything like that before but I can tell you I would order it again for sure. 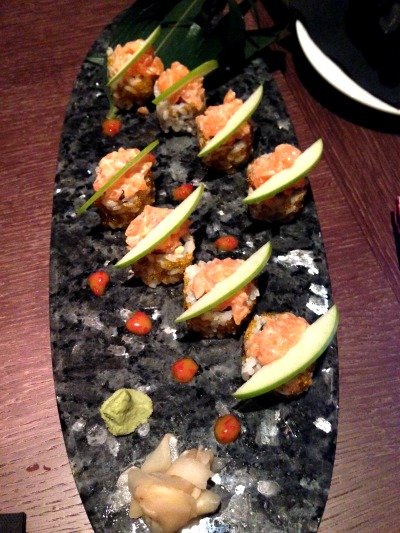 I was also very intrigued to try black cod as I’ve been in love with the way it’s served at Nobu since I first visited Nobu Park Lane in 2005. Since then it may have been a bit of an addiction and whenever I see it on a menu I have to sample it. Normally it never measures up to the original as it’s either too dry or there’s not enough sauce or the sauce is too sweet but this one flaked apart at the touch and the sauce had just the right amount of miso. OMG! 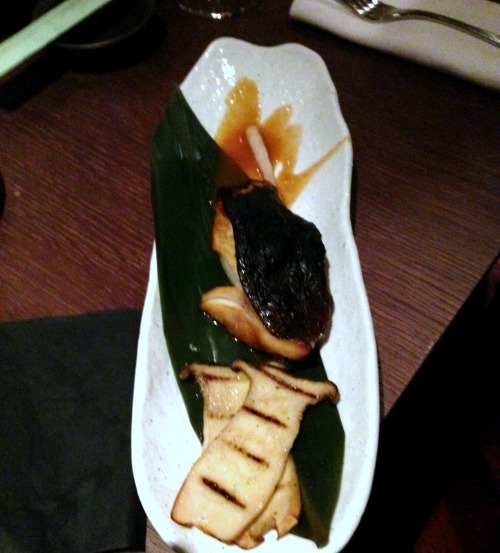 And check out the nigri – rich tuna, succulent salmon, crispy prawn and my absolute favourite –  eel. The sauce on the eel was to die for! 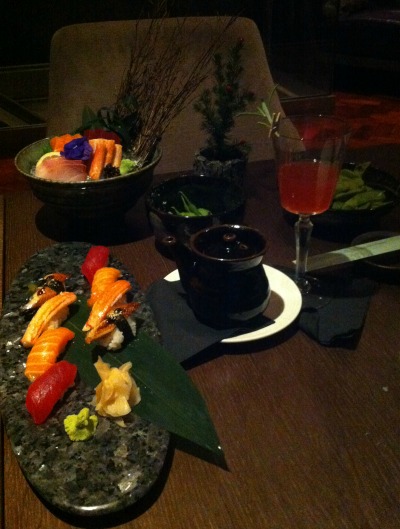 We also tried some spicy crispy salmon salad with Japanese tartare, which came brilliantly presented in lettuce leaves. It’s a bit like a healthy taco with the lettuce instead of the tortilla chip and salmon instead of questionable meat. It’s healthy and yet it tastes amazing – if more places had something like this on the menu it could solve the nation’s obesity problems…as long as they can do it as well as the chef at Salmontini. 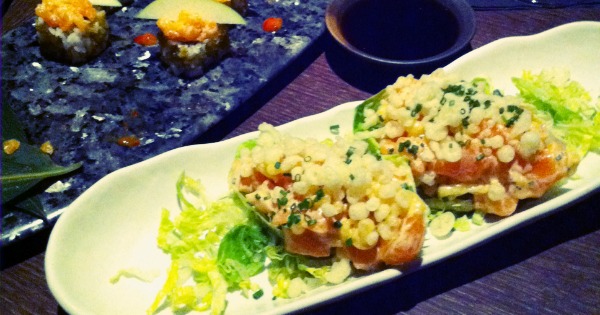 For me – a massive chocoholic – the proof is always in the pudding and Salmontini’s dome gets a perfect 10 out of 10. 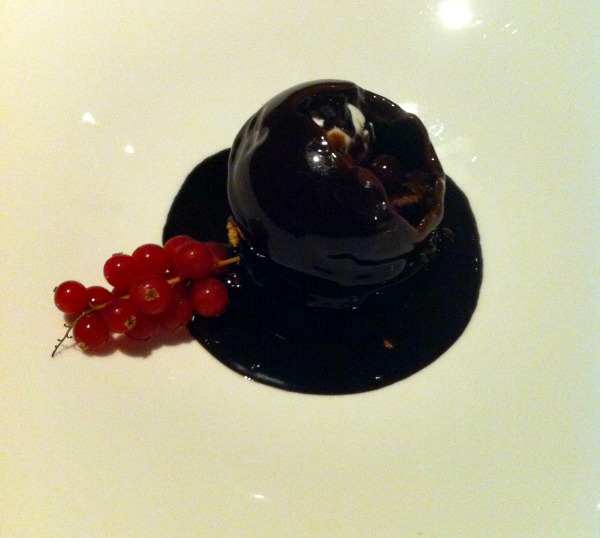 It arrived at the table as a sphere of chocolate and then a warm jug of hot chocolate sauce was poured over it and so the dome melted to reveal ice cream and a chocolate mousse cake. By this time, I didn’t care about sharing with my friends. I helped myself to as much of it as I could but I think they had the same idea as we finished the dish within seconds. Ooops!

The quality of the food led me to research who the chef was. It’s Spanish born, Esteve Prats Grau, who was previously at Tom’s Kitchen in Chelsea, a restaurant that I’ve visited a lot. The bartenders are equally well qualified. As one of them explained the Santa’s spicy secret cocktail to us he revealed he was in Bulgaria’s prestigious Cocktail-makers Guild. When he explained how he makes his own syrups combining water, sugar and chilli and bringing it to the boil we could see just how much he cared.To go full circle, the caring thing is what sets Salmontini apart from the crowd. That’s why it feels so cosy and welcoming from the moment you walk in. The waiters care about your comfort, the chef cares about the food and the bar staff care about the drinks. The Salmontini brand was founded by the Basilli family and it does feel like you’re being welcomed into someone’s home, a home that you wish you lived in yourself! If you like the best in life – and us VIPs deserve the best – then check out Salmontini. Let us know what you think on Twitter or Instagram – @livelikeavip