The Q Awards are the most rock’n’roll music awards ever! As they’re not filmed for TV and they’re held in the daytime it’s an excuse for some debauched behaviour. Vodka at 11am? Oh go on then…

This year it was sponsored by Xperia Access, the service for Sony smartphone users that gets them exclusive access to musical talent, and I was there to get some gossip. As the Sony table was right at the front, I was seriously tempted to climb on stage and steal some awards before it started. I mean, look at how close I was to the stage! 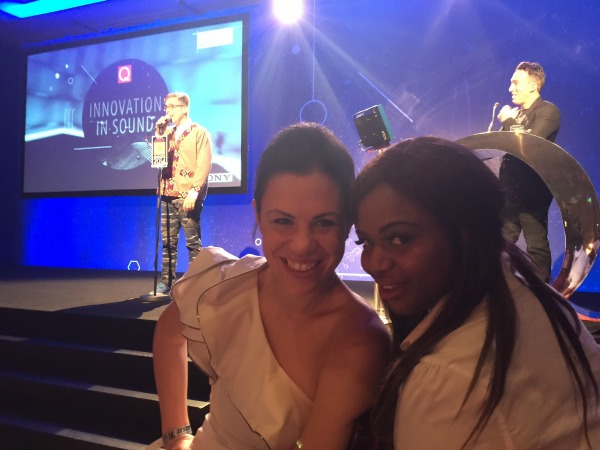 On turning up to the event, one of the things I did notice was that there was an interactive branding board. How has this never been done before? It’s so much cooler than a traditional card ‘Step and Repeat’.

Talking of cool, that’s definitely an adjective I would use to describe Foxes. Her outfit was from Felder Felder (which I would love to copy) but she said she was going around telling people she got it from Stevie Nicks’ wardrobe. Witty!

We were also introduced to St Vincent, who is not an artist I’ve come across much. She won the Maverick around and when they played a montage of her music videos, it looked both spooky and surreal. I’d say kind of like a more authentic, down-to-earth version of a star like Lady Gaga. She can also play a theremin.

The lovely Wretch 32 was there to present Best Solo Artist

There was a massive cheer when Ed Sheeran won! 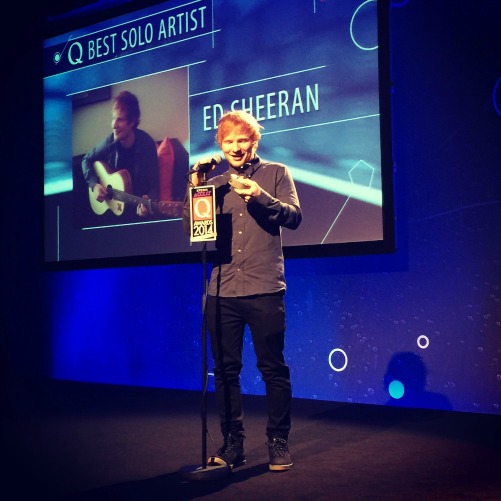 When he came offstage, I couldn’t resist grabbing him for a selfie. (The table near to the stage had it’s advantages!) 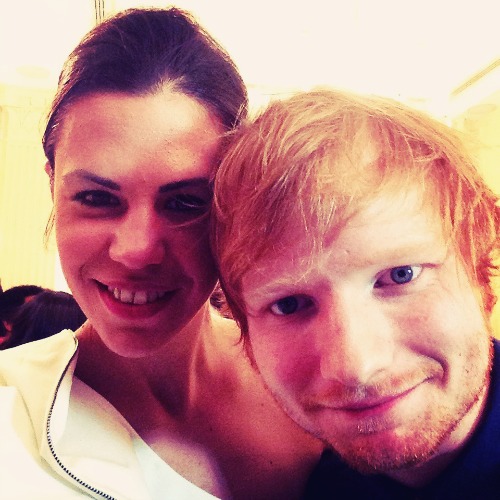 I followed him to the press room for a chat and he said he was ‘in a good place’ right now. When he first started in music, he took every review personally and found it difficult to repsond to criticism but now he said he does his stuff and he’s polite and friendly to everyone, no matter what they write. He said this lack of bitterness leaves him free to focus on music. I loved his laidback attitude.

Maybe because of the lunchtime drinking, the atmosphere was very friendly. Kasabian won two awards (and bass player Chris told me they now have 8 Q awards in their collection). Serge said he wanted what Sandie Shaw was on as he thought she was hyper when on stage presenting an award.

Bradley Wiggins went on stage and forgot who he was presenting to (he’d been drinking with Suggs!)

Just like Ella Eyre, who was actually off to perform at the MOBOs (and maybe put on a less revealing top?)

Same as Sam Smith, although he stayed to pick up a Q award and then picked up several more at the MOBOS

However, they were the ones that missed out for leaving as the ceremony contiued to rock. Jimmy Carr cracked a joke about Oscar Pistorious and the toilet (that was actually really cringe) but it got a reaction. 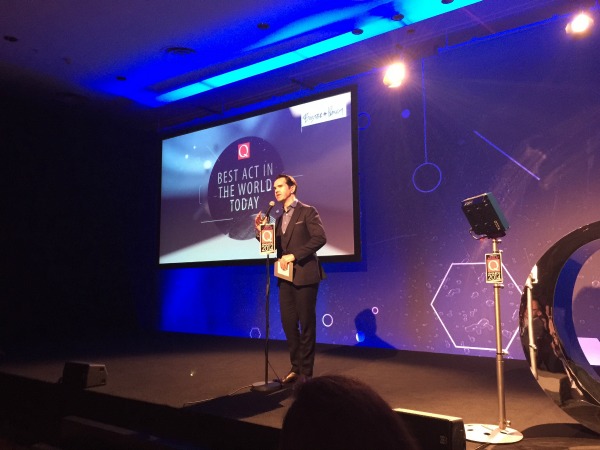 The winners in full are:

Elbow – The Take Off And Landing Of Everything

Pink Floyd – Dark Side Of The Moon