Last week, I wrote a blog post about how girls can get 50% off at Steam And Rye, the city bar that is part-owned by the gorgeous Kelly Brook. I thought it sounded such an amazing deal that I grabbed my sister and we went down to check out the cocktails, the food and the general vibe. 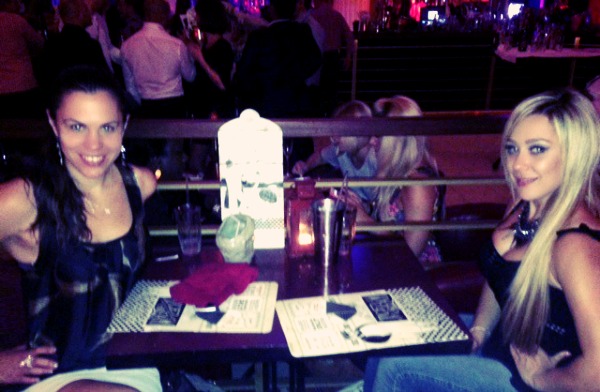 The bar’s really easy to get to, just a few steps from Monument / Bank underground station, which was great for us as we were wearing ridiculously tall heels. Girls appreciate shoes, right? And girls also appreciate cocktails, which Steam and Rye has definitely thought of. I can honestly say I have never seen such a creative cocktail menu and I’ve been living like a VIP in London for a long time (eg I set this blog up in 2011).

To show what I mean, check out the cocktails my sister and I started with. 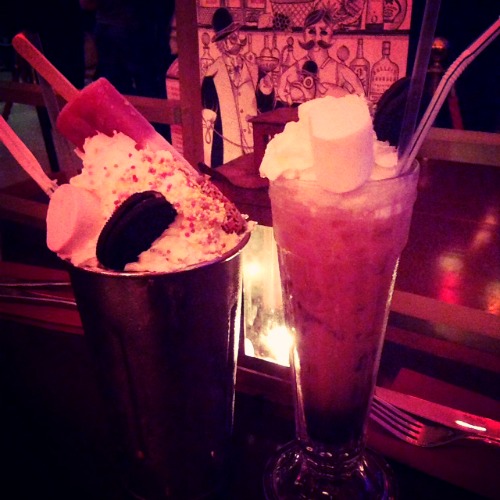 The one on the left is a Five Dollar Shake (which comes with a Fab lolly) and the one on the right is a Monica Lewinsky with chocolate sauce, amaretto, whipped cream, hazelnut liqueur and oreo cookies. YUM!

While consuming these little beauties we spotted these mad creations: 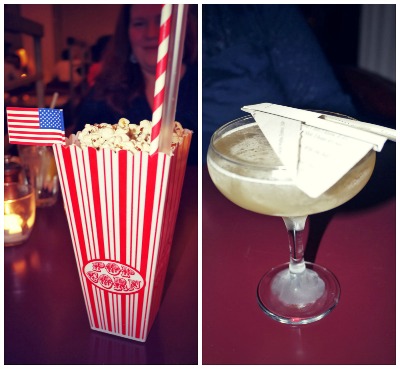 The one on the left is called Maize Balls and that is actual popcorn at the top of the ‘glass’. Inside is  Mount Gay XO, Lemon, Coconut and Caramel Popcorn Syrup. On the left we have a Mile High with rum, lemon and bubbly plus a paper aeroplane. But, of course!

Then you have a Kansas City Shuffle (below left) made from a blend of rums, absinthe, port and grenadine which is then topped with a handful of monkey nuts or the Dead Man’s Boot, chilli-infused Don Julio Tequila, Vanilla, Ginger Beer and Lemon. 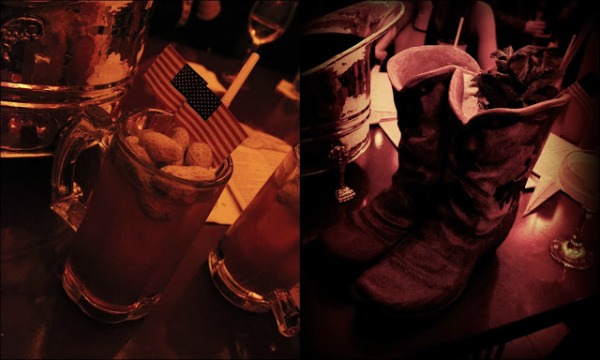 The Mississippi Lullaby was also pretty impressive. It was served flaming inside a fire bucket! 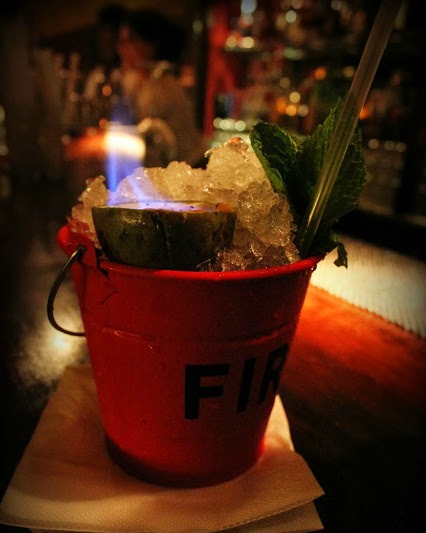 Normally these cocktails would be good value for what they are (between £9 and £12.50) but remember there is 50% off! None of the cocktails above are more expensive than £6.25. That’s less than the price of a glass of prosecco / vodka lime and soda in most bars and WAYYYYY more interesting.

But as the drinks are so spectacular. does this mean that food is just an after-thought? Not at all. My sister had a 500g cheeseburger served with a lobster tail and fries. Look at this juicy spread: 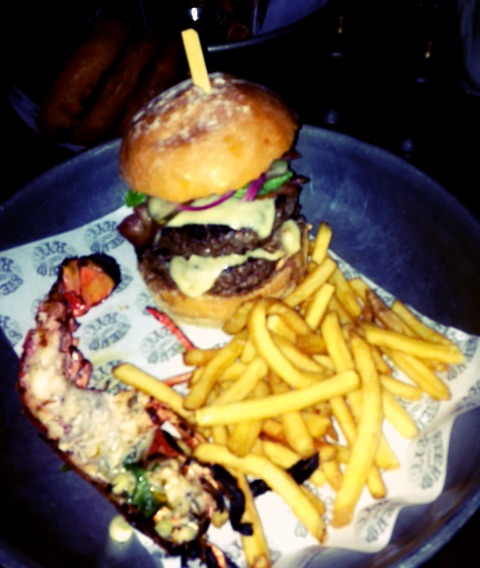 I opted for the lobster itself, which was served with a delicious creamy and herby butter. A small lobster is normally £16.95 but this was £8.50. Lobster for under £10. If heaven was a place on earth then Steam and Rye would be part of it. 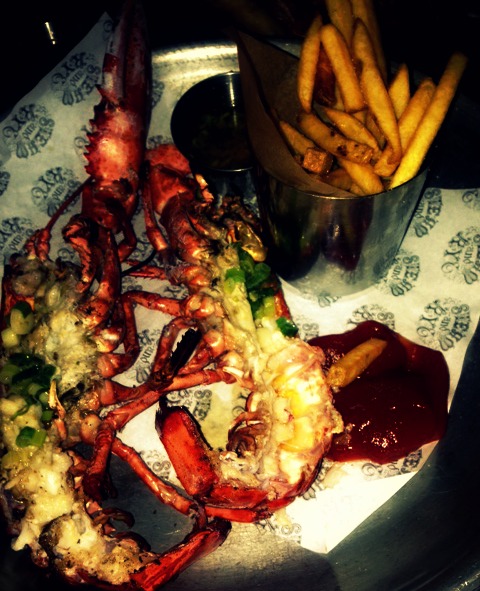 I wasn’t sure if the photos I took did it all justice so I found one online that looked exactly the same as what we ate. The onion rings (bottom right) were huge with crispy batter and a perfectly soft onion. Just the way I like it, especially dunked in ketchup.

At Steam and Rye you can definitely pig out, which is what we did, but if you want a lighter meal so you can focus on the drinks, try a lobster roll. Its lobster and mayo in a tasty brioche bun. I think I need to go back to try this and at 50% off I certainly plan to. 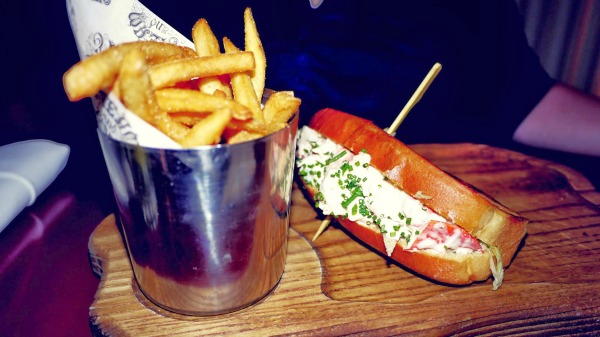 My sister and I shared a single portion of ice cream (salted caramel) to finish, which came with banana and pecan nuts to add eve more interest – this place is full of little extras that you don’t need but love.  If you were in a big group then you could order a sharing dessert, which is a sundae big enough for six people. I saw the table next to me order it and it came in a Martini glass that was bigger than my head. I would not order a big main course if you were considering ordering this! 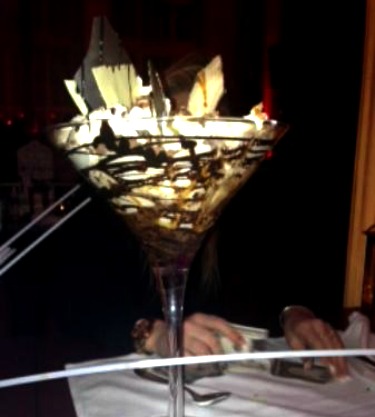 As for the venue itself, it was packed. There was a live band playing as we ate, which added to the atmosphere but I did find it a bit noisy at times. This would be good if you were going with someone you know well and don’t want to make small talk with and it’s definitely good if you want to dance off the calories. But I would say that maybe don’t expect to have a conversation with the person sitting opposite you.

Aside from that, a lot of effort has gone into the venue which manages to look like a moving train and a train station all at once. The booths in the restaurant have screens with scenery showing on the walls, making them the windows of the train. The bar is the station and it reminds me of Grand Central in New York. What do you think? 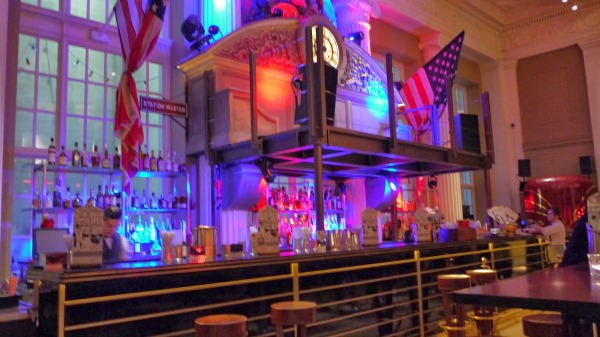 If you’re interested in doing this and getting 50% off all food and drink on a Wednesday just email Laura@steamandrye.com.

Tweet us – @livelikeavip – and let us know how you get on.