Have you ever had a facial peel? I was, until recently, not only a peel virgin but also a peel phobic. I got the fear from an episode of Sex And The City, when the feisty PR woman character Samantha tried a facial peel and was left looking with a red raw face that looked like she had severe facial burns.

But then I read an article about celebrity skin in the Mail Online, where it suggested that tons of my favourite celebs turned to peels to keep their skin looking soft and dewy. In Sex And The City, my favourite character was always the journalist Carrie Bradshaw – played by Sarah Jessica Parker – and the article suggested her flawless and radiant complexion was helped by skin peels. So, I decided if I am going to call this website Live Like a VIP, I actually have to do this and try a peel. So, I booked into the Regency Aesthetics clinic in central London for an acne and oil control treatment that involves a light fruit peel. 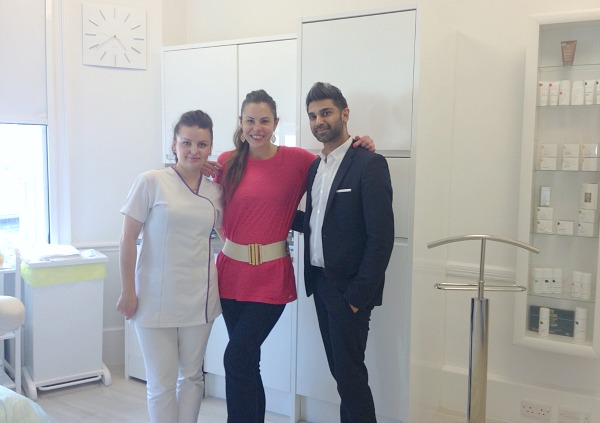 The light fruit peel is the most gentle of the peels offered at Regency Aesthetics and you can have it in your lunch hour and go back to work without requiring any time to hide away because you’re red (eg Sex and The City). This was important for me as I have a busy social life and I was meeting friends for drinks in Clapham the same evening as having the peel at 4pm.

But although it’s gentle, I was still nervous. Chemical peels work by peeling away the dead skin cells in the upper layer of the face, allowing new, healthier skin cells to emerge. But I’m used to the cells that I see in the mirror. How do I know what the ones underneath look like? And surely the new ones will be sensitive? Does that mean I will get spots? I put all these questions to the owner of Regency Aesthetics, Dr Rikin Parekh (below).

I am always more confident at a hairdresser if the stylist has good hair. So when I noticed that Dr Parekh had absolutely flawless skin, it did reassure me. He’s been doing all this since 2006, both in the UK and internationally, so when he told me I had nothing to worry about I did believe him, especially when he introduced me to the practioner who would be carrying out the peel. Jana. She had incredible bright and fresh skin as well, in the middle of them I felt like the unhealthy one.

Of course, I was still nervous as I sat in the chair as I’d scared myself by putting ‘facial peels’ into Google the day before. I don’t advise doing this. But although it’s a medical clinic and situated on Wimpole Street in the heart of London’s finest private medical clinics, it’s a gorgeous white room that feels more luxurious than some health spas I’ve visited. As the reclining chair went backwards until it was a bed and some relaxing music played in the background, I was so relaxed I actually stopped being afraid. 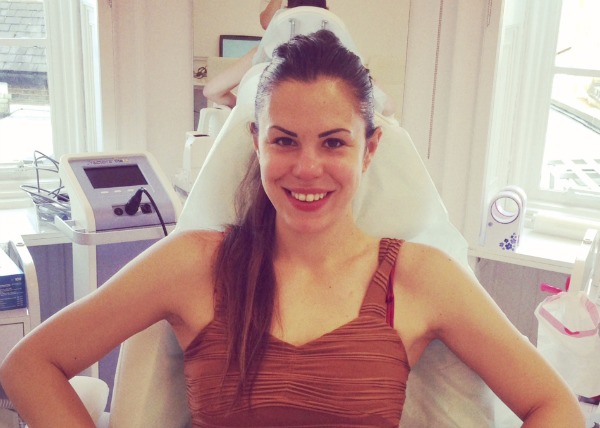 The treatment uses natural elements such as enzymes from plants, AHA acids and extracts from fruits and Beta Hydroxy Acids. Retinol is a derivative of vitamin A and is extremely useful in rejuvenation procedures. But although it sounds complicated, the process was very relaxing. This is what happens, step-by-step:

And the results? A photo speaks a thousand words so check this out: 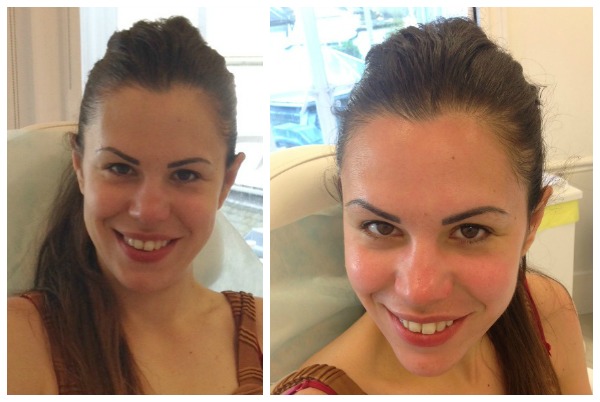 It’s a subtle difference.  I thought my skin was brighter as the dull layers, polluted by London smog and public transport were gone. You can see that the skin on my forehead and T-Zone, which are oily normally, were notably more dewy and fresh. However, it’s the touch that I noticed the most. My skin can be quite oily on the T-zone, especially on my nose, but as I ran my fingers over my face afterwards I noticed the whole complexion was more even. And it felt a lot softer than normal, which I felt over the next few days during my normal cleansing, toning and moisturising routine. When I moisturised my face, I felt like my skin was smoother to the touch. This is just a light peel as well. If you were feeling braver, and Dr Parekh thought you needed it, you may get more of a difference if you try a different procedure.

And yes, I did go out the same evening without any problems. Would I do it again? Absolutely. It’s a great way of undoing the damage of city life and once I got over the fear it was actually quite relaxing.

The Right Shades For Your Face Shape