Hello VIPS! The long Easter weekend is just in sight. We hope you use the time to enjoy yourselves with your family and friends. Here’s some juicy showbiz gossip especially for you.

Thandie Newton has shared the first picture of her son Booker after he was born early March. The shot was shared on Twitter with the caption, ‘Happy Holidays’. 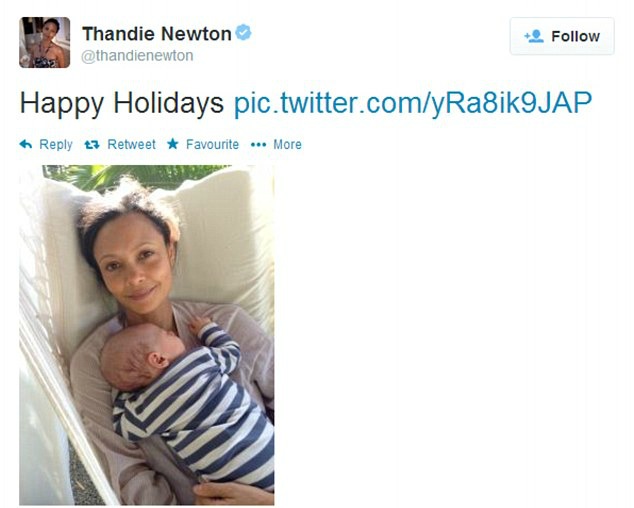 Lily Allen stepped out in an unusual rainbow Snoopy jumper. She teamed it with black jeans, white stilettos and a pink Chanel handbag. Brave choice!

Sam Bailey has revealed that she is having a baby girl. The couple already have a little girl as well as a boy and apparently their son Tommy hasn’t taken too well to the news. Maybe he’ll have a brother next time.

Another couple who are expecting a baby girl are Mila Kunis and Ashton Kutcher. Mila has reportedly been taking extra special care of herself by attending parental yoga classes in Hollywood. That will be one good looking child!

Miley Cyrus was rushed to the hospital after she suffered an extreme allergic reaction to antibiotics. This is a close call for the singer who suffers from a condition called Tachyeardia- a faster than normal heartbeat. In the meantime, she has been forced to cancel a concert in Kansas City, Missouri.

Jenny McCarthy is engaged to her boyfriend Donnie Wahlberg. She revealed the news on The View and showed off her large yellow sapphire ring. Congratulations.

In a series of leaked photographs from her Versace shoot, Lady Gaga is shown before her photoshop treatment. However, there doesn’t seem to be too much of a difference.