‘If you keep doing the same things you will keep getting the same results.’ This is  actually what my fitness Personal Trainer said to me when I asked him why I hadn’t noticed any changes in my body in the past few months (it turns out it might have something to do with the fact I keep making the same excuses for why I eat out so much and fail to order the healthy option). But until recently, this phrase applied to my love life too – I was single because I was stuck in a dating rut.

And then I found DoingSomething.co.uk (re-read about my experience in an Igloo at the top of The Shard) and realised there was a dating website for single people who wanted to make every moment of life count. Just because we’re single, it doesn’t mean we are destined to spend millions of nights in bars until we find ‘The One’, awkwardly asking our First Date about their favourite movies, favourite films, if they do sport and how their last relationship ended. No, we can do something fabulous – suggestions on the site include supper clubs, gliding, art classes, sushi classes – the sort of thing that you’d happily do alone and having someone to do it with is a bonus. In fact, some of my friends who are in relationships are really jealous at the potential candidates / date suggestions I’m looking at on this fun dating website. 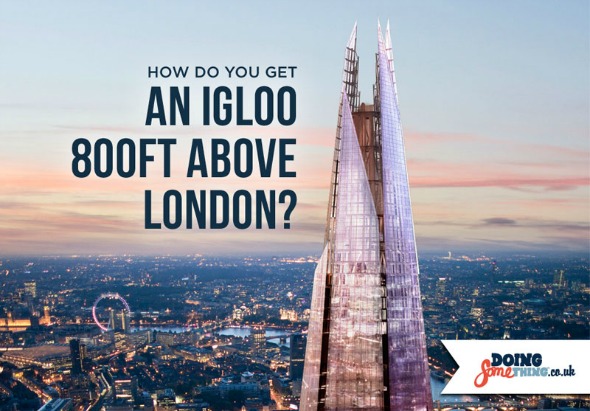 I’m not the sort of person to do things by halves – I mean, I don’t think you can be half fabulous – so I jumped into DoingSomething.co.uk not only head first but head first from the 10 metre diving board with a parallel pike and a few somersaults, Tom Daley style. I started off the traditional way by browsing the suggestions and then scrutinising the photos of the potential dates (and I can honestly say that the quality of photos is 100% betters than those on Match.com). And then I put myself up as a competition prize with DoingSomething.co.uk advertising me in their weekly newsletter, as I thought it would be a clear way to show all of their members that I was available. I mean, think about it statistically – the more people you reach, the more your chances of finding a match.

So what’s it like being a competition prize? To be honest, it was pretty scary and probably not something I would repeat. Next time, I would take a step backwards and use the site the way it was intended – by scrolling through the options and choosing the men based on their criteria. I don’t regret doing it as it was (a) no work for me as all I had to do was turn up rather than pick a date and (b) a gentle re-introduction to get me back on the dating scene as after several bad experiences on Tinder I had lost confidence in my ability to pick a good guy. But this was a completely blind date. I exchanged one or two messages with him beforehand to check he was turning up (and one heart-stopping moment when he didn’t get back to me for two days leaving me thinking he’s stood me up) and then when I walked into our date venue, I had no idea what to expect. We met in a room that was upstairs and with every stair I took I felt like I wanted to be sick with nerves. And I’m saying this as a girl who has met tons of celebs and doesn’t get star-struck. 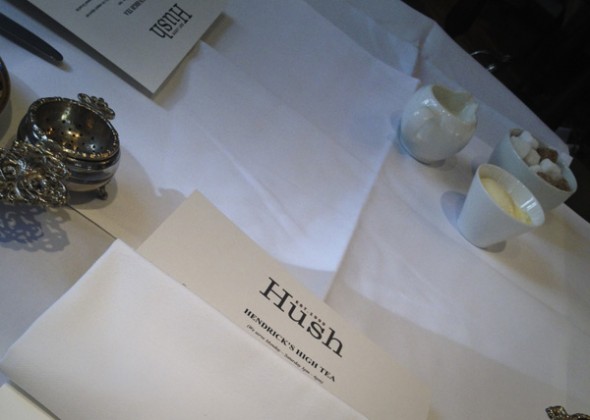 The venue for our date was the Hush restaurant in Mayfair, tucked off a side street near Bond Street. Sounds pretty standard for a date, some might think. No way, this is DoingSomething.co.uk so we were there for afternoon tea. But not just any afternoon tea – a Hendricks gin-based afternoon tea! This meant we got gin cocktails served in tea cups as well as a selection of sandwiches, scones and macaroons.Talk about a VIP way to spend an afternoon. A big smile came across my face as I walked in and realised I was finally out of my dating rut. I mean how could you fail to smile at a scene when walking into a lovely room like this? 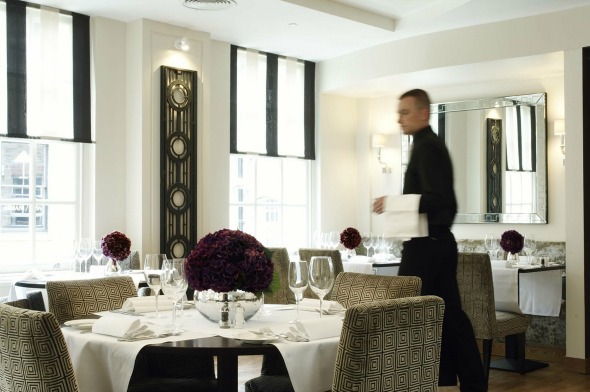 This is the gorgeous array of treats we had to nibble on: 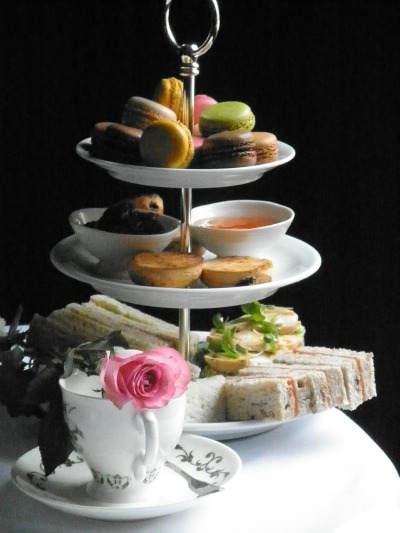 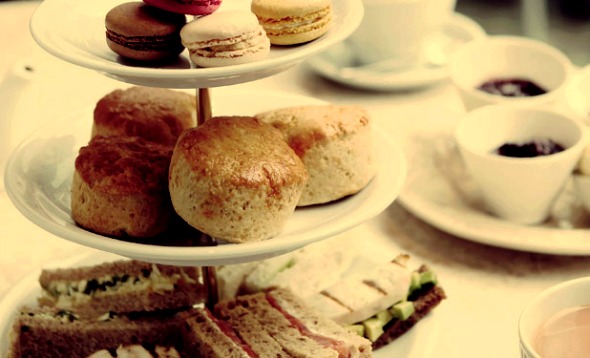 In the past, one of my worst habits when it came to dating was to judge the man too quickly. If I didn’t fancy him straight away then I would lose concentration quite easily. I would start to think about other guys I met recently or mentally schedule time to go back on the site and look for someone else, even when I was still on a date. So even though there were no shiny stars of attraction, no butterflies in my tummy, when I looked at my date, I vowed to enjoy it no matter what.

The fact that it was at Hush and over afternoon tea made it a lot easier to make the most of the occasion. As we looked at the gin cocktail menu, we laughed at the names of the cocktails – we had something to talk about. Top Tip: Try The Grandma’s Cottage made with fresh pear, blackberries and cinnamon syrup. It comes in a teacup on a stick (like a martini glass)! 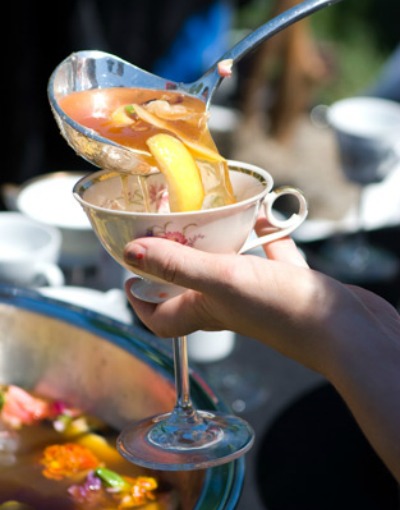 My date was from Devon and explained to me that the way that you approach scones in this region was cream first then jam. We argued a lot over this (but in a good way). Thankfully we got two scones each so not only could we try the three types of jam (strawberry, raspberry and blackcurrant) but we could try the cream-jam and jam-cream technique. I still maintain that jam first then cream (the Cornish way) is better.

After bonding over the scones, it was time to get onto the usual date stuff – job, upbringing, where they live now etc. On paper, he ticked all my boxes. He was an actor, he was 6 ft 4, his dad was a doctor and he grew up in a good family in Devon and he now owns his own house in Gospel Oak, North London, close to my favourite open space in London, Hampstead Heath. But I still didn’t fancy him and hated myself for it. (If you want to know who he is, email zoe@livelikeavip.com and I’ll pass on his profile from the dating site. He is a catch!).

But, anyway, faced with no chemistry, the only thing to do was to order another gin and see if the situation changed. While we were waiting for our drinks we did the standard dating thing of talking about current affairs. We talked about the missing Malaysian plane, we talked about conspiracy theories in general – Harold Shipman and Princess Diana – and we talked about newspapers and television news and the spin on which the media reported events. It was clear that my date was super intelligent, which is a good thing, but I also felt like he was testing me slightly. On a first date, I like to have a good conversation, I’m not interested in dating a man with all brawn and no brains, but I don’t want to have a full blown debate on the first date. I’d rather be playing footsie under the table than justifying why I’m more of a Tory supporter than Labour and giving the reasons why I like Angela Merkel. 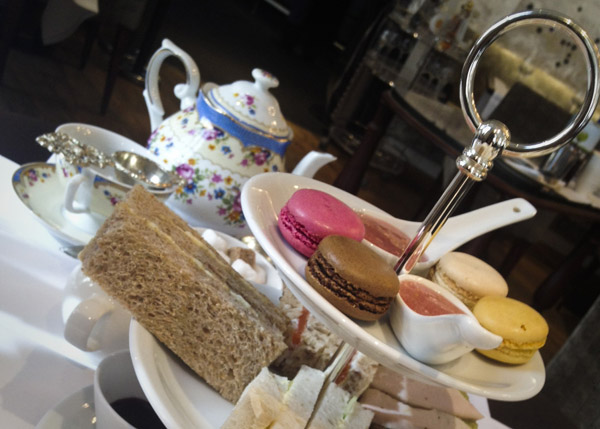 Thankfully, the macaroons saved the day. Yes, I’m serious. It’s impossible to have an in-depth chat when faced with something as light and delicate as a macaroon. So I changed the subject from Merkel to macaroons, telling my date where the best macaroons I’d found were in London (Fortnum and Mason instead of Laudree, for me). I’m not sure he was that impressed as he only ate one of the four macaroons – leaving me to eat three. Happy days!

I tried to like him, I really did, but after two hours you know if you like something or not. I LOVED the gin afternoon tea at Hush and I liked the fact I didn’t feel like I had wasted an afternoon because I got to try something I’d never done before. Have you ever had a first date that you come away from thinking ‘Well that was a waste of time?’ I have and this definitely wasn’t one of those occasions.

Looking on the bright side, the fact that I’m still very much single gives me an opportunity to do DoingSomething.co.uk the right way. I’m going to use the site to find a date that I choose, which is exciting! However, I am more looking forward to doing something new and seeing whether Hush can be topped. Is that wrong? Should I be more excited about the man or the venue?

Watch this space…I’ll be tweeting about my progress as well as writing about the full experience here on the blog. Follow @livelikeavip on Twitter!