When was the last time you ate Greek food? When was the last time you went to a restaurant and a delicious, filling and memorable meal for two with a bottle of wine was less than £30? I bet most of us aren’t able to remember a time for either, which is why I am happy to offer you one simple recommendation – go to your nearest branch of The Real Greek as soon as you can!

It was the venue for my interview with Greek chef Tonia Buxton (photographed below) so I asked her to order when we met for lunch at the chic and cosy branch in Marylebone. There are six locations around London so check the website for one near you. 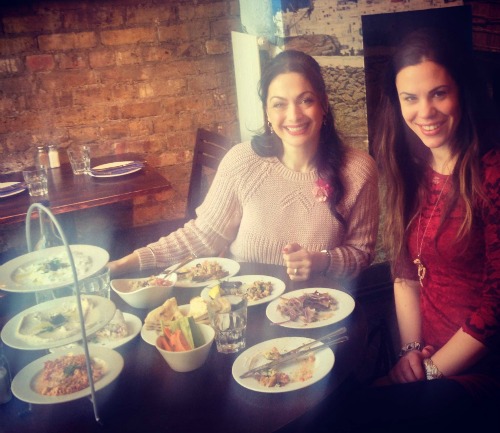 Before I went in, I was slightly apprehensive. I’d heard it was part of a group of restaurants with locations across London and often I find these sort of restaurants bland (I’m thinking Carluccio’s or Jamie’s Italian). I also have limited knowledge of Greek cuisine. I know it’s famous for vine leaves (which I’ve always found oily), taramasalata (which is very easy to make over fishy) and moussaka (and this solely depends on how long they’ve cooked the aubergine for and how much cheese they’ve added to the mix). But I wanted to make the most of the experience and I was willing to change my mind so I told Tonia to be adventurous in the order and push me out of my comfort zone.

As Tonia ordered, she put to bed one of my misconceptions that the food might be tired and bland by assuring me that as much of the fresh ingredients as possible in The Real Greek came from Greece. The feta, the tomatoes, the breads – all were as authentic as they could be. And then as she read out the menu to me, she explained the origins of some of the dishes. As Greece is such a vast space varying from tiny islands to a mainland that is large and mountainous, the food changes from region to region. While we may think dishes like calamari are traditionally Greek, you’re not going to get that up a mountain, are you? The dish at the bottom of the tower in the photo below is htipiti, which is Greek cheese with peppers and a touch of chilli.

On the top tier we have Tzatziki (rich and tangy yogurt with cucumber and garlic) and Taramasalata (cod roe). I have to admit I had more of the soft, fluffy bread than the crudites as it was so more-ish.

When I say the word ‘Calamari’ what do you think of? Order this in a pub as a starter and you may get some rubber in a circle that’s been deep fried. I’ve certainly never had calamari that looks like this before and now I know how it should taste if you get it right I never want to compromise again.

The calamari had been grilled not fried and as The Real Greek has calorie information on the website, I could see that a portion of calamari had just 286 calories.

Crispy Pork Belly prepared with 0regano, paprika and red onion has just 257 calories per portion. And remember, you’re sharing so at most you’ll eat half or a third of that. With moist, succulent meat, it was a real treat but without the accompanying calories.

Each of these hot dishes is around £6 while the cold ones are £4 – you really do eat like a King or Queen (not just a VIP) at The Real Greek – and the prices are excellent value for money.

I also advise you to try a Souvlaki, which is a Greek wrap, slightly like a kebab but way better. It’s a greek flatbread wrapped around meat or falafel, tzatziki, onions and sweet paprika. Each mouthful floods your tongue with a variety of flavours that complement each other but it is very filling!

For dessert, a portion of baklava – light, crisp filo pastry with walnut and honey – is just £4.25 for two pieces. This photo shows one of them – divine! 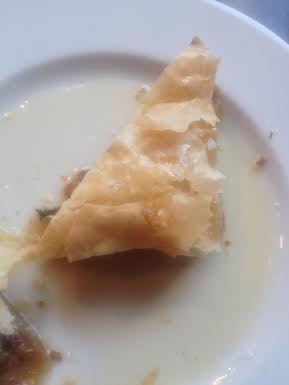 After that I needed a coffee to aid digestion. At The Real Greek it comes out thick and strong – very authentic to Greece. It made me more awake for at least an hour after my visit. Just what the doctor ordered.

I’d go back to The Real Greek for lunch or dinner with mates or with dates. If you’re going partying in central London it’s the perfect pre-party meal as you feel satisfied without feeling stuffed and as you’re not paying silly prices for the food you can spend more on drinks.

Let me known if you go and Tweet me your photos. I’m @livelikeavip. You can follow The Real Greek @realgreektweet