Every winter, the celebrities flock to the ski slopes while I’m sat in the UK looking at photos. Normally, I actually try to Live Like a VIP by attending the parties / fashion shows / premieres they go to and occasionally hanging out at a popular beach destination (like Ibiza, baby!) However, I cannot ski. I have never ski-ed. This puts me at a disadvantage when I see Mariah Carey, Elle Macpherson, Cara Delevigne, Prince William and Harry, Seal and Heidi Klum always ski-ing…and now the Kardashians are joining the celebrity ski club.

I wasn’t sure this would ever change but recently I got an email from The Snow Centre in Hemel Hempstead, telling me of a new promotion in 2014 ahead of the Sochi Winter Olympics. I was actually born in Hemel Hempstead (30 mins outside London on Junction 8 of the M1), I went to school in Hemel Hempstead and yet I had never ventured to this slope. That, and the photo of Kim Kardashian and her family enjoying the slopes in Aspen was all the inspiration I needed. I realised a while ago that if I wanted to Live Like a VIP then I’d need to ski and now it’s cheaper than ever I’m running out of excuses why I don’t learn.

The new offer is for Fridays, where experienced ski-ers can get 4 hours of ski slope access (between 6pm – 10pm) for just £39 for 2 hours. For the less experienced and complete beginners like me, adult ski and snowboard lessons are £49 for two hours between 8pm and 10pm and you get a complimentary drink in The Lodge apres ski bar afterwards. That’s about the same cost – or less – as what you’d spend on a regular Friday night out plus you learn a new skill and meet a new bunch of people. Since I am really new and I am very badly co-ordinated (I blame the fact I always wear heels and so can’t get the hang of the flat snow boots), I decided I would need a private lesson and because I was at home over Christmas my brother and sister decided they wanted to come along too. Do we look similar to the Kardashians? Well, maybe not exactly but I was impressed with the quality of the hired clothes (available for £6.75 for the kit). 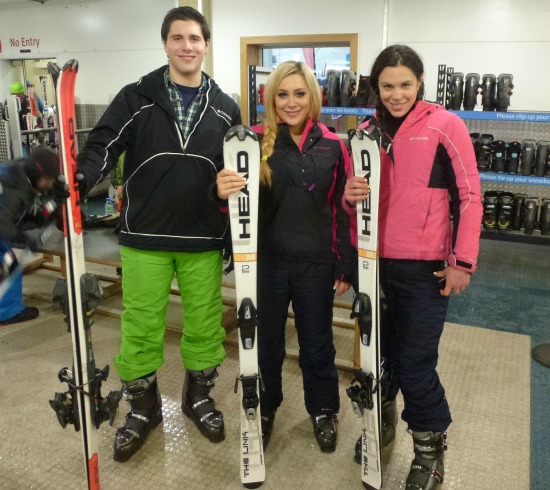 At first glance, I’ll be honest and say the snow centre doesn’t look like much. From the outside, it looked like the size of the lodge the Kardashians would stay in when they went to Aspen. But appearances can be very deceptive as when you go inisde there are three floors (including a coffee shop, restaurant and bar, ski equipment hire and two slopes!) 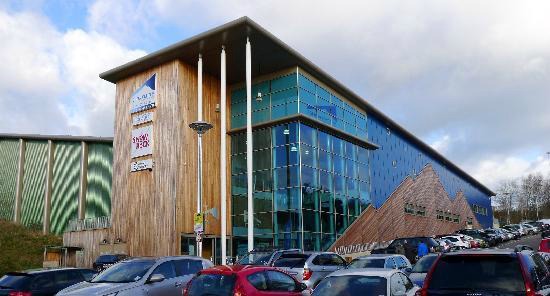 This is what it looks like inside, with a long and quite steep slope on the left hand side with a ski lift, and the nursery slope on the right hand side. You probably won’t see it this empty though, as it was a popular hangout on the Friday I visited. I mean this in a good way, as the atmosphere was buzzing and people looked happy to be there.

So what happens? We were told to get there 30 mins before our lesson to get kitted up and we needed every moment of that time. First of all, we rented the waterproof jackets and trousers and then we got our boots and skis. The boots fit on a bit like ice skates. Although they were flat, they were quite supportive around the ankles so I didn’t feel as weird as I expected. Here’s me showing my brother what to do. 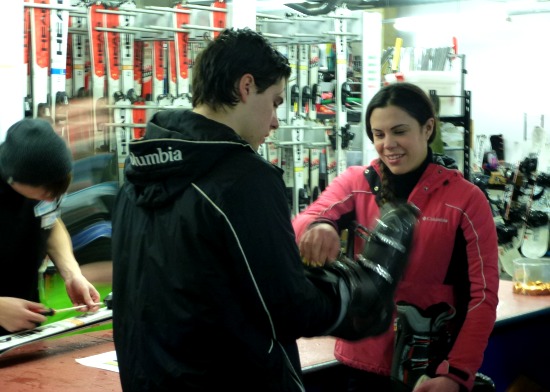 The lesson started promptly at 1pm and I was very impressed by our instructor Max Rayner. I must admit I did recognise him (he was on the BBC3 show Sun, Snow and Suspicious Parents) but this was not the place to ask about that – it was all about the learning. And learn we did, as Max took things step by step. Even better is he explained what he was making us do and outlined what he hoped we’d be able to do by the end of the session. The goal: a snow plough. This may not sound like much to the experienced ski-ers out there, but I truly am clumsy.

We started off with the basics to get confidence. When each step was mastered, Max praised us and I appreciated that. One of my friends had never ski-ed before and enrolled at a ski school while on her ski vacation. She ended up quitting after the blunt German instructor made her feel rubbish. Max just reassured us all the way and I think I was harder on myself than he was. Check out my expression in the photo below:

The first thing we did was find our balance by balancing on one ski and sliding around like we were on a child’s scooter. It got us used to the sensation of sliding around on the snow and it showed me that it can be pretty fast once you get the rhythm going. After this I expected to put on two skis but there was more balance work. We stood sideways and climbed halfway up the nursery slope (sideways because we would glide down if we attempted to walk up facing forwards). It wasn’t that easy to balance on one leg while going downhill as I think I was scared of losing control. Sensing this, Max made us do two on each leg before letting us put on the other ski.

We walked up, sideways, to the top of the nursery slope and he showed us how to turn round in a snow plough until we were facing downhill. If you turn round any other way you’ll start sliding downhill and end up careering into a wall or another group of ski learners. And if you do the turn wrong you’ll end up on your bottom, getting laughed at by your sister! 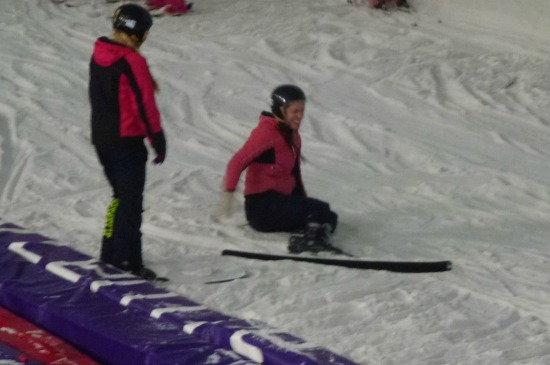 Max said I wasn’t the worst ever ski-er, which reassured me a bit, and it made me keep on going. After the fall and being slower to get to grips with the movements than both my brother and sister, I did look at the clock a few times but Max ordered me to climb back up and told me he knew I could do better. And do you know what? I did. And so did my siblings Here’s my brother in that snow plough. 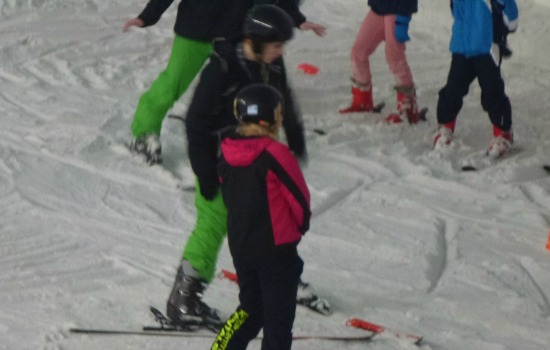 After a few goes of the snow plough our hour ended, and despite my earlier clock-watching I was pretty sad about that. I wanted to go higher up and change the angle of my skis so I went quicker. Maybe I could have even practised more snow plough stops and maybe even tried a bit of turning – things that get taught to beginners in the next stage of their lessons…

I guess that means I’ll have to go back for two hours of lessons on a Friday! Want to join me? Check out The Snow Centre website for details of Fun Friday and everything you need to plan a visit. You can see more photos on The Snow Centre Facebook page or follow @the_snowcentre on Twitter.