I’m currently in New York, partying hard after running the New York marathon so this is a US special version of the daily gossip post. Being out here in America has made me realise just how much I focus on the gossip that happens in the UK. I’m missing out! From now on, I want to bring you the news about what the VIPs are doing around the world.

If we want to live Like a VIP we need to look closely at what the VIPs are doing and because I’m in New York, I was able to see what the stars were doing at the first ever YouTube awards, Starting with Lady Gaga, who turned up without trousers and with dodgy teeth. I’m not sure if the teeth and trousers are VIP but at least Lady Gaga has a vision and sticks to it.

Vanessa Hudgens looked super cute in a Dali-eque printed dress. During the actual awards, she was brave enough to get bloody (with fake blood) for a sketch during the awards ceremony. From that, perhaps we can learn that part of living like a VIP is being open to all opportunities?

And another part is looking absolutely fabulous! I just love M.I.A

Eminem was one of the winners – named artist of the year. However, he does not look impressed by the sketch that the awards show host did before presenting him with the award. Eminem is never one to hide his feelings. Keeping things bottled up is not healthy people! 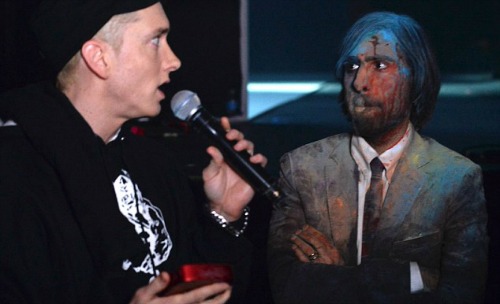 Ryan Lewis and Macklemore won the YouTube breathrough award. What can we take from this? I’d say that veryone has to start somewhere. If you’r embarking on an important procject then keep going and hopefully you’ll get recognised for that soon.

The winners and nominee are:

Video of the Year:

Artist of the Year:

Response of the Year:

Innovation of the Year:

Meanwhile T-Pain wasn’t a winner and he wore his sunglasses inside. You have to admire his CONIDENCE.

And what else is going on in the States? It was great to see Alicia Keys and Swiss Beatz enjoying the atmosphere of the NYC marathon with their adorable baby. Alicia’s half brother run the marathon, which is why they have the finishers medal – they didn’t steal it! Excercise is VIP too!

Over in Los Angeles, Pink looked gorgeous on a date night with husband Carey Hart.Normally we see her in tom boy / athlete mode but she looks fantastic channeling the 1920s look, I think.

But let’s end with the cutest photo yet. Who’s the dad and baby in the photo below?

Beyonce posted it on her Instagram so unless she was taking photos of random people in the pool it’s Jay-Z and baby Blue Ivy Carter. Almost makes me broody!

Today is my last day in the States so stay tuned for my travel tips about New York and my blog about being on the Wendy Williams TV show and a bit more celeb goss.

I want to make this blog as entertaining as useful as possible so if you have any suggestions please tweet me @zoegriffin or email zoe@livelikeavip.com.