For the last few weeks, I’ve been posting an exercise video that I’ve starred in but today I want to shake it up a bit. This week, I want to let you know about a completely new experience, that will definitely change the way you train. Taking your mother to an fitness class. And not just any old class – Barry’s Bootcamp, a workout so effective it can burn up to 1000 calories in just one hour. 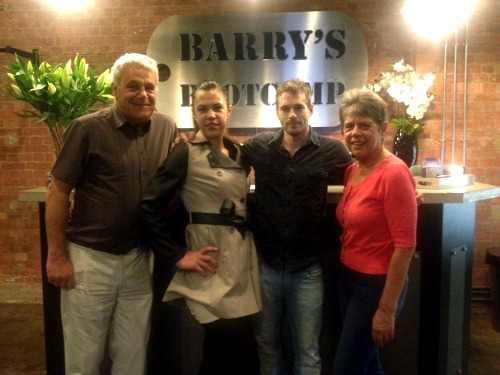 Above right is my mother, a squash champion, competitvive table tennis player, FA referee and long-distance runner. In the middle is celebrity trainer and co-owner of Barry’s London, Sandy Macaskill, The man on the far left is my lovely father but he sat the class out due to injury (or was it fear?) In the London venue of Barry’s Bootcamp (for there are outposts in the celeb capitals of the world like LA, New York and Miami) I’ve seen celebs like Guy Ritchie, Ellie Goulding, Lily Allen, Paloma Faith, Kelly Brook, The Saturdays and Princess Beatrice. And just because I love a good video to explain things, and to better illustrate how tough it is, check out the video of when Bloomberg TV tried Barry’s Bootcamp London

I’ve blogged about Barry’s bootcamp before when I did a week of classes back to back (click here for a reminder). That was in February when it first opened in London and since then my speeds have increased by more than one mile an hour. I can almost run at 12.5mph for 30 seconds. What is great about the workout is that you exhaust your cardio by the runs and then you move straight onto resistance based exercises to build lean muscle. Each day a different muscle group is targeted – from butt and legs to arms and abs – so you can do the class every day and rest assured no two days are the same. In a week you can burn 7,000 calories and easily lose 2lbs.

BUT if you ever take your mum to a class, I bet you would work harder. Either your mum is super fit like mine so you want to show off. Even if your mum isn’t particularly fit, you may want to show off and make her proud. No matter what,  having your mum next to you watching everything you do is equally as effective as having a trainer watching you. If you don’t believe it, try it and let me know what you think? And if you’re brave enough to do Barry’s let me know what you think – tweet me @zoegriffin

Workout Of The Week: Barrecore

VIP Body: How To Maintain A January Weightloss