It’s a dilemma we’re all faced with: What to do when funds and time are low and the need for relaxation is at a high? For London, and a handful of cities scattered through Southern England, Dove hopes to provide an answer with their day spas—where most treatments begin under £50. (Dove: it’s more than that soap your mother used to scrub you down with as a child.)

On holiday with a few hours to kill, I headed over to Dove Spa at Canary Wharf. Which, for the record, is stunning (If it’s a nice day be sure to go early, pack a lunch, and spend some quality time contemplatively into the Thames.) Sure its facility is limited to beauty procedures…but please, I didn’t fly all the way from Los Angeles to break a sweat. 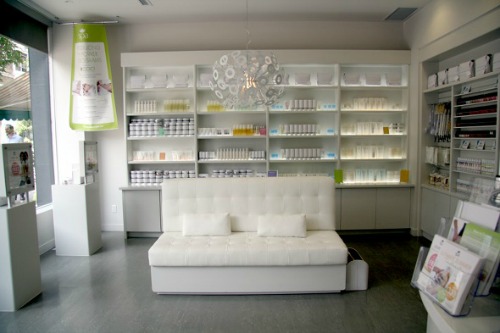 Located under a Virgin Active, the Dove’s basement salon and massage rooms are remarkably unintimidating.  A surprise for this relaxation newbie—although in retrospect it should have come as no shock, as Dove was the company who produced these ads. I was met by a duo of bright-eyed women, who genuinely seemed pleased I was there, and remained upbeat throughout. (Why yes, I would like a cup of tea…)

My caregiver for the day—a tiny blond woman with a wispy voice and hands of steel—lead me into the backroom recounting the details of the “Pure Bliss” package in a soothing murmur that downgraded to a coo when she found out this was my first massage. A 15-minute massage. Facial. Manicure or pedicure. Perhaps sensing my confusion (again: spa newbie. A mere 24 hours earlier I found myself picturing a day at the spa in the same light one recounts a Game of Thrones episode.), each procedure was described in detail, down to asking the touch I preferred during the massage portion. (“Uh, hard,” I replied. “I’m from good German stock.”) 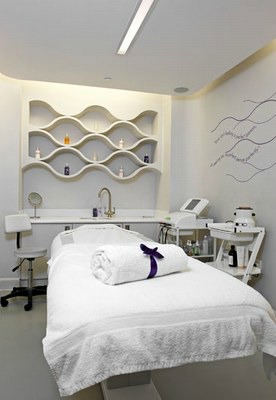 Then, I was left to strip in the darkened room and wait. Despite my general feelings regarding my personal nudity in public places (to bastardize a Woody Allen quote, I’m not afraid of being naked, I just don’t want to be there when it happens.), I found it easy to get comfortable in the darkened, sweet smelling room—save for a few ominous bass rattles in the new age-style soundtrack. That relaxation doubled when the massage therapist returned and started working out the knots in my back. Yes, yes, YES….uh, what were we talking about again?

After fifteen minutes she gently flipped me onto my back, and then began applying all manner of fragrant oils and lotions of my face. (The predominate smell was something akin to the ocean—although there were floral notes in the mix.) I would have asked more, as my skin is known to be ultra sensitive. But then again, I did fill out a form telling them such, and it’s hard to exercise journalistic curiosity when you’re close to purring with delight.

Massage and facial over, I dressed and joined my therapist in the nail salon where I was instructed to pick out a color for my manicure. To her credit, she didn’t laugh when I held out my ragged, typing cracked fingers and requested a simple clear coat. She neglected to clean the crap out from under my fingernails—but I will say, dirty or not, having someone bring shape to my claws made a world of difference.

And so, I left Canary Wharf a changed woman, sold on the power of a rejuvenating afternoon. Sure, it wasn’t a weekend away, but the experience was rather nice on my wallet. That person staggering through the streets of London later that evening like a sweet smelling, boneless, uber relaxed zombie? Oh yeah…that was me.

Visit the Dove Spa website t0 book. Click on the tab that says Salons and you’ll be magically whisked away to a map that will allow you to pick the location closest to you. Or phone  0844 875 1575

Price for massages start at £39.

Tresor Paris Invited Us To Skate In Style