When you’ve been busy working or looking after your family (or both) and you have free time you need to make the most of it. Recently I wrote about how I went on a mini break to Bath and Windsor (which was INCREDIBLE) but it involved at least three hours of driving. I kept forgetting that lots of European destinations were under a two hour flight away…so with that in mind I picked out Cannes for a weekend break. What can we do for 48 hours in Cannes? Armed with some Gucci sunglasses and a Mulberry handbag, I went off to investigate. 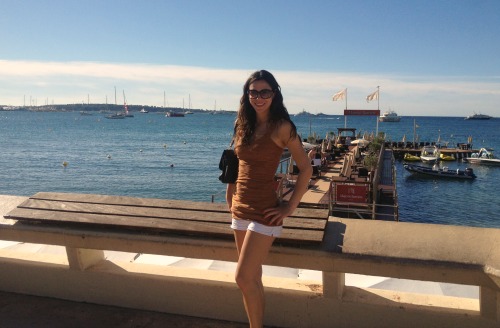 It may sound a bit like I’m boasting at jetting off to Cannes but please read on because this blog post is about how we can all Live Like VIPs. I’m about to explain how you can keep costs down and suggest what is worth spending money on and what isn’t.

But first of all, why Cannes? If you want to feel like a VIP, to walk down streets trodden by movie stars, drink Martinis and cocktails and a coupe de Champagne in bars frequented by old school Hollywood actors and directors then it has to be this French city that is world-famous for it’s film festival.

From mid-May to the end of May, the entire city is dedicated to all things movie and film with gala premieres in Le Palais Des Festivals and screenings taking place in various venues across the town. The biggest hotels on the Promenade, which is affectionately known La Croisette, host nightly parties in their bars and on their private beaches while super-yachts spill out of the main harbour, where demand for a berth is so precious it starts at 1000Euros rental a day…and no, that doesn’t include the boat. Nor the designer wardrobe you need to show off every day. 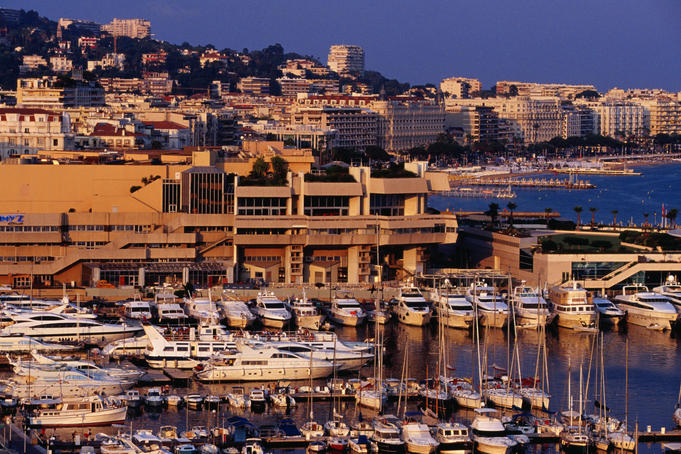 I avoided the film festival for my mini break as I find it too crowded and I’m told July and August are also pretty busy. In September, you have more room on the city’s pavements and in the restaurants but it’s still warm enough to wear a bikini. 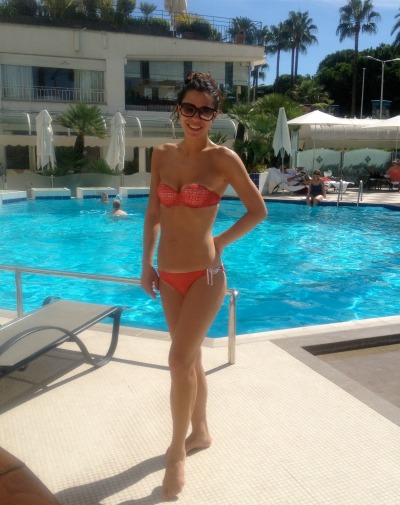 One advantage of going slightly out of season is that the prices drop. During the film festival, I know that hotel rooms are in demand with many Hollywood studios booking up the main hotels on La Croisette so that the cheapest price you’ll get a room for is 600 Euros a night. Breakfast not included. Then it’s 50 Euros in season for breakfast, 35 Euros for a sunbed and 12 Euros for a bottle of water. Unless you really care about something, I don’t think its worth to spend this amount of money on one day’s accommodation.

However, go in September, like I did, and you can stay in exactly the same hotel the stars stayed in for a fraction of the price. I never ever imagined I would see the inside of a room at the Hotel Martinez let alone sleep there for two nights but check out this photo. I did it! 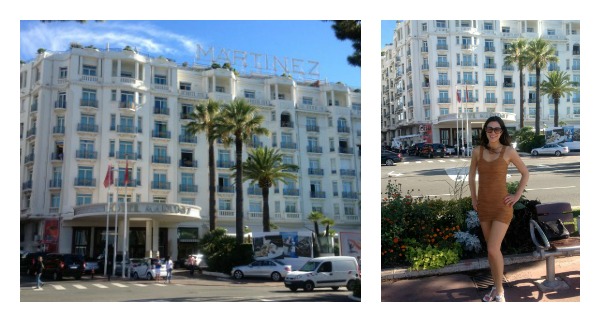 How can you do it to? Check out Booking.com and you’ll see that rates in September are from just £234 a night. Ok, that’s not cheap but it’s a hell of a lot better than £500. And I can promise you it’s VIP service – in that hotel during the Cannes film festival I’ve personally seen the staff waiting on celebrities including Brad Pitt and Angelina Jolie, Jonny Depp and Tim Burton,  Damian Lewis, Cheryl Tweedy, Naomi Campbell, Eva Longoria and Mrs Carter herself – Beyonce. And if it’s good enough for Queen Bey…

Hotels like the Martinez have two main attractions. One is the service as I mentioned above but the other is not the amenities in the hotel rooms. They’re clean and functional but the interior of the room is slightly dated. I couldn’t put my finger on exactly why this was but I think it may be because I’ve stayed in Five Star hotels in Dubai and in Asia and they’re miles more sophisticated and decadent than the inside of the Martinez (which is meant to be a Five Star).

However, the second attraction to the Martinez is brilliant – the location. The Martinez is located right near the row of designer shops open by the seafront. Every designer has a presence in Cannes including Roberto Cavalli, Giorgi Armani, Cartier, Dior, Chanel and a newly opened Michael Kors boutique. Look at how stunning and chic it all is. It doesn’t matter if you can’t afford anything, just walking in the shop and seeing the beautiful handbags and shoes is like being in an art gallery. 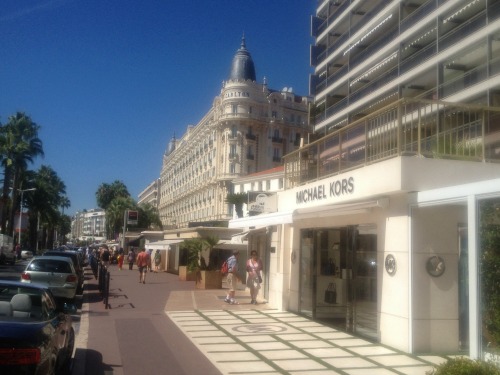 So that’s the hotel sorted, now what to do with the time you’re not sleeping? One of the key social hangouts in Cannes is the beach but it’s a bit more complicated than that – you need to pick which beach club you visit. You would never catch a VIP with their towel spread out on the sand with no staff waiting on them (although it is possible to do this on a stretch of beach near the Palais des Festivals). It’s a lot more fabulous to lounge on a chic lounger with a plump cushion or double bed that’s as comfortable as the one you sleep in, with access to a drinks list served by waiters in pristine uniforms and a snack menu consisting of everything from sushi and wagyu beef burgers to a tangy Tuna Niçoise salad. I was pleased to see that in September prices are half price for a day bed – at the Martinez hotel’s private beach it’s €20 euros for non-hotel residents and €17 for residents. Go early and make a whole day of it and yes it’s expensive but the service makes it completely worth it. Beaches that the stars like are the private beaches of all the hotels plus a chic beach club called Le plage 45. Walk down La Croisette to look at the atmosphere in each before making your decision as you can look down at them from the pavement and assess how buzzing they are inside. 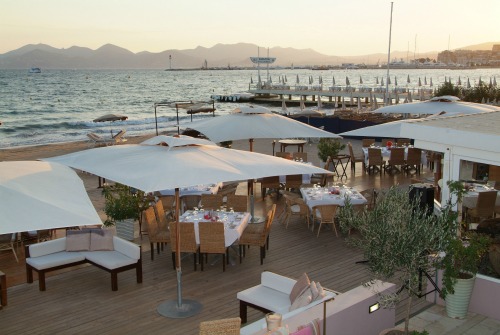 After a day at the beach, I worked up a bit of an appetite. Partly because it was too hot to eat and partly because, quite frankly, the cost of food in these beach clubs are expensive. So I highly recommend Pizza Cresci, which local Cannes VIPs took me to. Here’s us dining al fresco. 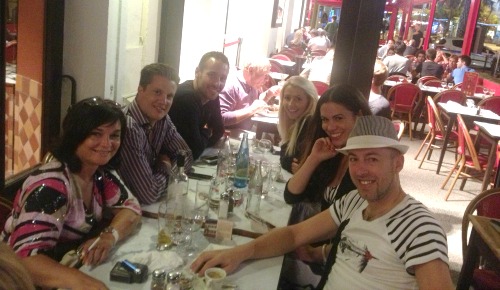 Fabian (in the hat) owns his own hair salons in Switzerland and Ivana (next to me) is a luxury yacht broker. I was lucky to have these insiders telling me what’s good but now I’m passing them on to you. You won’t be disappointed – I felt stuffed and well refreshed with wine and it was just 23 euros each! Better value than in London?

Another top tip when it comes to eating and drinking is something the French call Rose-Lima. It’s rose wine with lemonade. I’m very much a Champagne girl – that will always be my number one drink – but a refreshing rose Lima may well be my second. And it’s so cheap! You can buy it by the glass or by a small bottle (50cl) as well as by bottles of magnums. All the restaurants have a decent selection of rose (unlike in the UK where you just get one) and I would highly advise going for one with a pale colour, which feels refreshing and light on the tongue especially when mixed with lemonade. 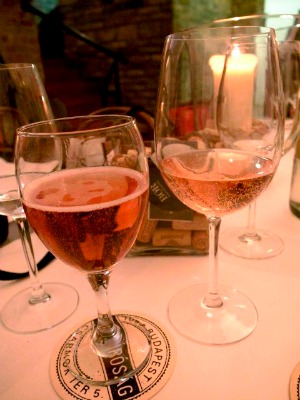 Shopping in Cannes the next day, I saw there is something for all budgets. You don’t have to go designer as there’s a high street with all the top European brands like Mango and Zara and there’s also a few brands you won’t find in the UK like pimkie . Even if you don’t buy anything it can be quite fun to walk down the street to see what everyone else is wearing because French style tends to be more chic than what we have in the UK. Find a look you like worn by a Frenchwoman and then go online shopping when you’re back home.

Shopping always makes me hungry and so we had a delicious lunch at a brasserie called New York, New York. In Cannes, you have to be careful to avoid the tourist traps on the main croisette, so go up away from the main hotels and past the Palais and you’ll see New York, New York on the opposite side of the road near to an area where the local French play boules. Sitting outside on the terrace makes you feel like you’re in a different world and a tasty beef carpaccio served with salad and thin French Fries is just 15 Euros. There’s also some delicious grilled fish and portions are hearty and satisfying! Coffee for afters… 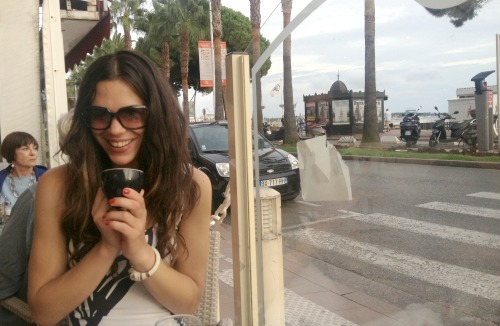 The weather was so good it was tempting to sleep it off on the beach but I wanted a bit more culture before I left. I found out about Galerie Arista  during the Cannes film festival, as the owners let out property in the area. I briefly visited the gallery while I was staying in their property as they hosted a cocktail party during the Film Festival but I never got a look to check it out properly. So I went back this time…and I was blown away. 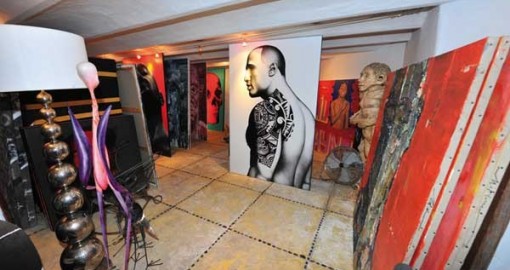 It’s modern, bright and full of strong and bold pieces – from art to sculpture. In fact, I preferred the sculpture. It’s a must- visit if you’re in Cannes – please check out their website for more.

And to end this post on a sweet note, make sure you try some ice cream while you’re in Cannes! Cannes is very close to Italy and so you’ll find tons of Italian restaurants here as well as places to get a great quality gelato. Some of the beach front stalls have better quality ice creams than others so if it doesn’t set you on fire you must save the calories for something that’s worth eating. The beach shacks are on the other side of the road to the hotel and numbered and there are at least 15 spread out along the side. From number 10 I got banana-chocolate and tiramisu in a waffle coat.

To get from Nice to Cannes, the cheapest option is an Express shuttle bus, 3o Euros return. Buy tickets in advance here.

Travel Tips: Booking.com offers great deals on hotel accommodation. Don’t be scared to walk round before you buy. Because of the quantity of tourists Cannes receives each year there are hundreds of shops and restaurants so don’t part with your money until your REALLY like something and know you’re getting the best deal.