The anniversary of Elvis’ death is 16 August and this year the date was marked with the publication of a new book called Elvis Returns, Elvis Is Alive II by Robert Mickey Maughon. This was no ordinary book launch as Robert showed off his new book, the sequel to Elvis is Alive, VIP style with a drinks party at the Ritz.

Hearing the words Ritz and Elvis in the same invite made me RSVP yes immediately and here I am collecting a cold glass of Champagne on arrival at the five star luxury London hotel. So VIP! 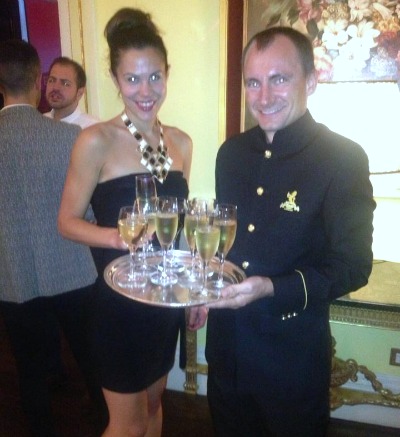 There were some famous faces at the party (more of that below) but my first mission was to find out more about the book. If there’s so much of an effort gone into holding a party for a book it must be pretty special. Book launches are hard work as I know from the experience of my own book, Get Rich Blogging.

So why is the book so special?

The sequel to Maughon’s first book Elvis Is Alive is an entertaining romp through the Australian Outback, where The King is found very much alive, and working as an impersonator. It has been said that when the brain is given a question it cannot answer, it becomes consumed with discovering the solution. This fictional novel, based on the premise that Elvis Presley has been living life disguised as his own impersonator, takes the reader along on one man’s quest to discover the truth about this mysterious music icon. Along the way, in exotic locales around the globe, he encounters many twists and turns, and in these challenging and riveting experiences, continuously wonders what might be next. In this intriguing tale, Dr. Robert St. John follows his intuitions (and Elvis) to the beautiful desolation of Australia’s Outback, seeking answers to burning questions about the King of Rock ‘n’ Roll that continue to haunt him…questions that the whole world has been asking for a long, long time. It’s currently £8.95 on Amazon

The party itself was fantastic as TOWIE stars and Hollyowaks stars mingled with London society and literary elite. TOWIE’s Sam Faiers was absoutely dazzling as she arrived at the launch in a red trouser suit.

Sam is really hard working as her day involved travelling from Essex to Manchester to work in  a pop up of her shop Minnie’s Boutique, then back to London for the launch. After two hours at the Ritz she was back to Manchester to do Saturday and Sunday in her shop before watching Beyonce at the V Festival in Stafford. No wonder she’s looking so slim in that suit – does she have time to eat?

It was very much a trouser suit night, as Hollyoaks actress Gemma Merna looked chic in black for the party with a twist of blue on her statement necklace.

It just goes to show you don’t always need a mini skirt to stand out…maybe I might start wearing trousers to parties occasionally. Do you think I should?

What I think is you should check out this book if you like games of cat and mouse and conspiracy stories, mixed in with a bit of humour. Check it out on Amazon

And don’t forget that you can follow me on Twitter @zoegriffin Do let me know what you think of the book or other stories that I write on my blog. I love hearing from you!

Get The Look: Sam Faiers’ Neutrals