Happy Monday everyone! It may be the start of the working week but let’s treat it as a fresh start. We’re alive and most of us have a lot less issues than some of the celebs I am writing about today (Miley Cyrus and Madonna in particular!). It was a busy weekend in the celebrity world with the stars letting their hair down at a variety of nightclubs on Saturday night then anyone who’s anyone attending the Teen Choice Awards in LA on Sunday. Let’s start with the Teen Choice Awards:

On a serious note, it was used as an opportunity to pay tribute to recently deceased Glee star Cory Monteith.Glee won Choice TV Comedy and star Amber Riley brought up the issue, thanking fans for their support and saying Cory was like a brother to them all. Sob! For details of what she said and other ‘best quotes’ see E! online.

Miley Cyrus wore one of the worst outfits I have ever seen (and looked way too skinny). There are a few fashion galleries online today, with everyone looking better than Miley (sorry Miley). A good fashion round-up can be seen here.

And finally, it was great to see British stars involved and being nominated / winning. The show was opened by One Direction, Twilight star Robert Pattinson picked up some trophies and Little Mix walked the red carpet. Yes, Little Mix! Given the fact they’re in the US and doing what The Saturdays and The Wanted did (turn up at random award ceremonies), it leads me to think when will the Little Mix girls have their own reality show? Soon, I think!

For the full list of Teen Choice winners, visit the LA Times website. And talking of teens, Madonna is acting like one. She had a PDA of affection with her much-younger man Brahim Zaibrat at a festival in the South of France at the weekend. And the main thing is – what the hell has she done to her teeth? For more details, see here

Kelly Brook also had a man in her life at the weekend, to show her cheating ex Danny Cipriani she’s best of without him. After a night at London bar Mahiki with her celeb mates Myleene Klass and Katherine Jenkins, Kelly ended up sharing a taxi with her Taking Stock co-star Jay Brown. See the photo below and get more gossip here

The cast of The Only Way Is Essex also had a wild night out on Saturday. It was Sam and Billie’s mate Ferne McCann’s 23rd birthday so they grabbed a lot of their most orange mates and headed to Cafe De Paris in London where they presumably danced around their handbags and glowed in the dark. Classy? See more photos here

And I was also out on the town at a very special party. Well-connected Italian Lavinia Davolio launched a new luxury confectionery brand – Lavolio – at the Italian Cultural Insititute on posh Belgrave Square. I will bring you more on the Lavolio on this blog very soon, but as you can tell by the smile on my face in the photo below – these treats are goooood. 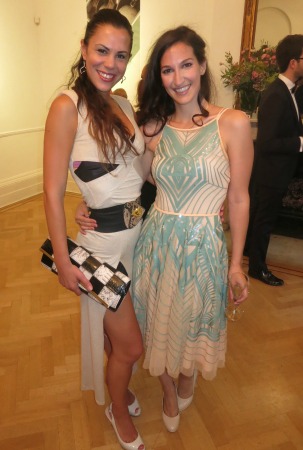 Check out the Lavolio website if you need something strong and tasty to get you through the Monday blues. I’ll be back tomorrow morning with another round-up of celeb gossip. Have a fantastic day!