Looking for a perfect VIP weekend? There is no other place to shop ‘til you drop or party all night long than ‘the city that never sleeps’; New York, New York. I’ve had a romantic view of New York for a long time, listening to the lyrics of artists such as Alicia Keys, Jay-Z and Paloma Faith, musing about the city of opportunity, where dreams come true, etc. and it certainly delivered. 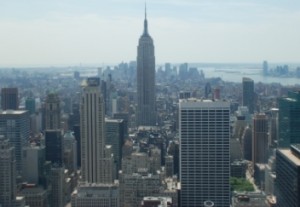 It’s probably not the kind of place to visit on a whim, as unlike the more accessible city breaks in Europe, it is quite a pricey trip, but for anyone with a spot of Carrie envy, it’s incredible. There are plenty of inclusive packages available, but for the savvy shopper, buying each element separately can lead to finding bargains. I believe for me, the entire cost of the 4-day, 3-night, weekend; flights, accommodation and shopping and spending included, was around £800.

I arrived at night time, to find myself taking an infamous yellow taxi cab through the bright lights of the city. Times Square is the place to start any evening, with its poster-like scenery, gift shops galore and of course the Broadway theatre district. 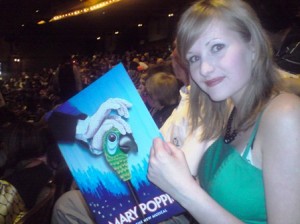 Broadway is a great place to go celeb spotting, especially as so many big names grace the stages, such as Tom Hanks in Lucky Guy (until 3rd July 2013), Jane Lynch in Annie (until 14th July 2013) and soon Orlando Bloom will be taking to the stage in Romeo and Juliet (from 24th August to 24th November 2013). I decided to go for Mary Poppins for my first Broadway experience, to ease my way in light-heatedly, but I also ended up seeing theatre classic Phantom of The Opera too, and managed to get signatures from all of the cast. Often signed merchandise can be purchased in aid of a charity event – I paid $40 for mine for World Aids Day.

I decided to stay downtown, near the former the site of the World Trade Center, now home to the One World Trade Center tower. I actually stayed in the Marriott Hotel, which received considerable damage during 9/11, with the building split in half by the collapsing South Tower and flattened by the fall of the North Tower. For this reason there is a real atmosphere of respect and patriotic pride in the re-built hotel. Visiting during off-peak season, room prices can be as low as $151 (£98 GBP) a night.

If your stay is only a weekend, I recommend saving money on taxis (which run by the meter and on the busy roads can clock up high fairs quickly) by booking on a tour bus, such as the City Sightseeing bus which offer 3 day hop-on, hop-off routes and of course point out all the places associated with celebrities and movies. Seeing the hotel Beyoncé often stays at, much of Donald Trumps’ empire, and the location where John Lennon was shot outside his apartment were things I may have missed if I hadn’t used the tour service, as well as some of the locations that popular TV shows such as Sex and the City and Seinfeld were filmed.
The City Sightseeing Tour takes you to the city’s big attractions, such as the Empire State Building, Central Park, Broadway, Macy’s Department Store and The Ellis Island (State of Liberty) ferry point, but some of the fun also lies in discovering the unexpected! Along my tour we came across the famous busker ‘The Naked Cowboy’.

Also, don’t be afraid to ask for more, I was able to get a guided tour of a city fire station (by a group of hot fireman) and listen to first hand stories of the tragic events of 9/11 just by knocking on the fire house door and asking. It was pretty cool to see this, often missed, side of New York City.

Walking round central New York in the day time feels like you’ve stepped straight onto a movie set. Not least because there are so many recognisable movie locations! I felt caught up in a strange mix of King Kong, I Am Legend and Home Alone 2! If you a film enthusiast, don’t forget to stop by the Natural History Museum to reminisce scenes of Ben Stiller playing fetch with the T-Rex skeleton. You can even have your photo taken with Dum-Dum.

Embracing your inner Carrie Bradshaw is easy on 5th Avenue, with all the designer stores just a stone’s throw from one another, it’s a shopaholic’s heaven. The fancier stores are often protected by armed guards, reminding you just how expensive and luxurious these shops are.

If you’re shopping more on a budget, I found some good department stores with high street prices, such as Century 21. There are also plenty of candy stores around, including M&M World and the Reese’s store and many more to indulge in a sweet treat. I also found that Saturday’s Central Market sells souvenirs, food, and confectionary treats at a reasonable.

In terms of food, the US is pretty similar to the UK. There are some great diners around Times Square, as well as your standard fast food joints. For something a little different, why not stop by the beautiful decorated al fresco dining area at the Rockefeller Centre (an ice rink in winter) and watch the world go by? Or be a true tourist and grab breakfast at Grand Central Station!

With so much to see and do, you’ll leave with thoughts of a return visit for sure. Is easy to understand the appeal the city has to its rich and famous, but also there are a lot of fun stories and quirky characters to be found. I also love the sheer number of pampered pooches around the city!

ESSENTIAL INFO
Nearest Airport: John F. Kennedy International Airport (7.5 hours approx from London)
Currency: US dollar. £1 = $1.54
Time Difference: -5 hours
Guestlist Tips: Instead of paying to go to Ellis Island to see the Statue of Liberty, take the free ferry to Staten Island, birth place of Christian Aguilera, which offers brilliant views as you pass the statue. With celeb properties on Staten Island, you never know who you may bump in to.