How do you make planning a hen do easier? I copied what the celebs do and tried to avoid ending up as stressed as the woman in the photo below…

My friend, who wants to remain anonymous, has been there for me for years. I reckon she’d have said yes to anything I asked her and besides, I’m meant to know what I’m doing when it comes to organising parties. But hen dos are another level entirely!

What did I do? First of all, I’m a blogger and a journalist. What’s the first thing we do when confronted with a task? Wikipedia! Ok, that might not give me much luck. Google it was then. Type in Hen Stuff into Google and the first thing that comes up after the paid for searches is www.henstuff.co.uk. I ended up being there for quite a long time. There is something on there for all tastes. If you want a super tacky blow-up willies, bridesmaids veils, badges, t-shirts and even fancy dress hen-do then you’ll find that on there. But you’ll also find some classy items at really affordable prices.

As you can see in the photo above, I ordered some angel wings. I wanted a classy way of making everyone know who was the bride to be. None of this veil nonesense! And I also got A LOT of confetti. Not to throw over her now, honest, but what makes an average room, even a hotel room, look miles better is a lot of pink and red shiny confetti. And lets face it, if you’re staying in a hotel room then you don’t have to clear up afterwards!

I was also inspired by some neon face paint. I hadn’t planned to get this but it shines under UV! Imagine the bride to be and the other hens don’t know this and think it’s a large neon eye crayon…until they get to the nightclub. It’s not just the stags that have tricks up their sleeve, you know and this is pretty harmless. 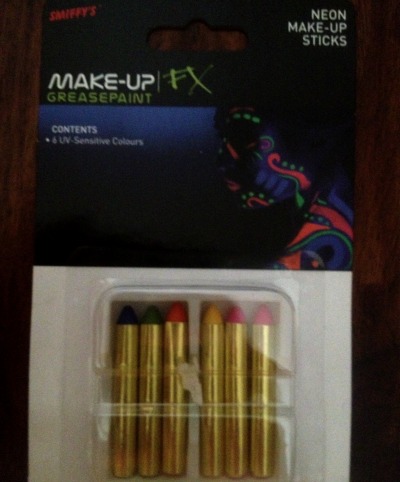 So how much was all of the above? £20.04 and if you spend over £20 delivery from Hen Stuff  is free. I think I got tons of items for that amount – I’m so impressed!

The hen do is scheduled for the end of May so I have a bit of time to decide whether I want a spa kind of hen do like the Saturdays singer Rochelle Humes. Maybe a day at the spa as I want to put those neon face paints to good use and then a night in the club, Cheryl Cole style. The reason I say Cheryl Cole is because I was a journalist at the Mail on Sunday when she had her hen do before marrying Ashley Cole, and I ended up dancing on the tables in a club called Umbaba with her mum, (It’s so long ago the club doesn’t exist any more but I’ll NEVER forget that night!)

Maybe I should google ‘Hen activities’ for inspiration…I’ll keep you posted if I come up with anything fabulous. PLEASE send me a message on Twitter if you have any suggestions – @zoegriffin – or email zoe@livelikeavip.com. Thanks!